Dan Abrams, Media Lawyer and Author of “John Adams Under Fire,” as the Reincarnation of Patriot Printer Isaiah Thomas of the American Revolution 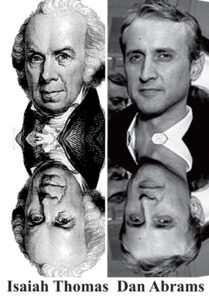 Dan Abrams is a lawyer and media entrepreneur. Abrams received a degree in political science prior to law school. Early in his career, he worked as a reporter for Court TV where he covered the OJ Simpson case and the trials of Dr. Jack Kevorkian, who helped terminally ill people commit suicide.

In recent years, he has achieved high visibility due to being the Chief Legal Affairs Anchor for ABC News. Dan is also an author and has written books on three US Presidents, including Abraham Lincoln and Theodore Roosevelt.

His most recent book is John Adams Under Fire: The Founding Father’s Fight for Justice in the Boston Massacre Murder Trial. Though Adams was a fierce advocate for American independence, he also believed that the British soldiers who fired muskets upon a threatening mob should receive a fair trial. When no one else would represent them, Adams volunteered.

John Adams later wrote of the Boston Massacre: “On that night the formation of American independence was born.”

Dan Abrams wrote of Adams and his defence of the British soldiers:

“He volunteered to represent them, keeping the peace in a powder keg of a colony, and in the process created some of the foundations of what would become United States law.” 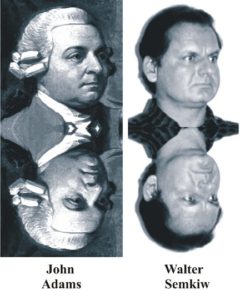 I have an interest in the American Revolution because I had an incarnation in Boston during that era. My first book, Return of the Revolutionaries: The Case for Reincarnation and Soul Groups Reunited (2003), is about a cohort from that time that has reemerged today, a cohort that includes me. In that book, I am identified as John Adams reborn.

Ian Stevenson, MD of the University of Virginia compiled over 1500 validated childhood past life memory cases that in aggregate provide proof of reincarnation. This evidence shows that we can change religion, nationality and ethnic affiliation from one lifetime to another.

Most wars are based on differences in these cultural markers of identity, so understanding that these markers are only temporary can help create greater peace. An important case in this regard, as well as others, are provided below:

Reincarnation Cases with Change in Religion, Nationality and Ethnic Affiliation

Reincarnation research shows that people usually do the same type of thing and follow similar career paths from one lifetime to another. Adams and his colleagues sought to create greater equality though the creation of a democratic country, the United States, which led to another revolution in France. In this way old monarchies were cast off in the name of self-rule.

Evidence of reincarnation will free us from the control of old, established religions, the monarchies of spirituality, and reveals that we truly are equal regardless of what religion, nationality or ethnic group we belong to.

Reincarnation research also allays fear of death and affirms that our souls are eternal. As I like to say:

“With compelling evidence of reincarnation, who needs faith?”

Dan Abrams as the Reincarnation of Isaiah Thomas, Publisher of the “Massachusetts Spy”

I had a hunch that Dan Abrams also was part of the American Revolution and I reasoned that he was likely a newspaper publisher, as Abrams is a reporter and media entrepreneur.

Since 2001, on roughly a monthly basis, I have been working with trance medium Kevin Ryerson who channels a spirit being named Ahtun Re, who has demonstrated the ability to make past life matches with a high degree of accuracy. In a session with Kevin over the telephone, I asked Ahtun Re whether Dan Abrams was incarnate during the American Revolution and if so, was he a newspaper publisher?

As is usual, Ahtun Re said, “One moment,” during which he psychically tunes into the subject of interest and waits for information to come to him. He can access a record of events that is engrained in the spirit realm, which some call the Akashic Record.

Ahtun Re returned and related that Dan was a newspaper publisher in Boston during the Revolution and that his periodical was supportive of the Patriot cause of Independence.

After doing some research into Boston newspapers and their founders, it appeared that Isaiah Thomas was the best candidate. In a subsequent session with Kevin, Ahtun Re affirmed that Dan Abrams is the reincarnation of Thomas.

Isaiah Thomas was born in 1749 in Boston, Massachusetts and as a teen he was apprenticed to a printer. As an adult, Thomas worked as a printer in New Hampshire and South Carolina.

He returned to Boston and in 1770 he formed a partnership to create a new newspaper, which was given the saucy name, the Massachusetts Spy. The Spy did indeed support the Patriots to the extent that the British colonial government took Isaiah Thomas to court, though in the end a grand jury failed to make an indictment. Due to this experience, Thomas moved his printing presses outside of Boston to nearby Worcester, Massachusetts, where he settled.

Isaiah Thomas and the Boston Massacre: Reporting Across Two Lifetimes

The Boston Massacre occurred on March 5, 1770, with the trial taking place later that year. As such, Thomas must have covered that trial for his paper, which means that Isaiah Thomas and John Adams knew one another.

Consider that Isaiah Thomas reported on the Boston Massacre trial, then reincarnated as Dan Abrams, who wrote the book John Adams Under Fire, which is about the very same trial!

The Massachusetts Spy also reported on the first battles of the American Revolution that took place in the Massachusetts towns of Lexington and Concord on April 19, 1775. Isaiah himself participated as a soldier in the Battle of Concord.

Following the decision by the Continental Congress to separate from Britain on July 4, 1776, Isaiah Thomas had the honor of performing the first public reading of the Declaration of Independence to the citizens of Worcester.

Like Dan Abrams, Isaiah Thomas was an author of books and he wrote the History of Printing in America, with a Biography of Printers, and an Account of Newspapers, published in two volumes in 1810.

In 1812, Thomas founded the American Society of Antiquaries, now known as the American Antiquarian Society, and donated his collection of 8000 books to its library. Thomas died in 1831.

Physical Resemblance in Reincarnation Cases: There is a similarity in the facial features and demeanor of Thomas and Abrams.

Past Life Passions, Talent and Abilities: Isaiah Thomas was a reporter and newspaper publisher for the American Revolution, while Dan Abrams is a reporter on legal matters and founder of a media empire.