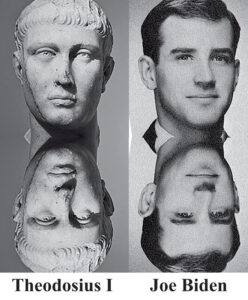 Joe Biden as the Reincarnation of Christian Roman Emperor Theodosius I

I have worked with trance medium Kevin Ryerson since 2001 and have found that Kevin channels a spirit guide named Ahtun Re, who has demonstrated the ability to make past life matches with a high degree of accuracy.

When I asked Ahtun Re who Joe Biden might have been in a past lifetime, he immediately told me that Biden is the reincarnation of Roman Christian Emperor Theodosius I, who, of course, I had never heard of.

Past Life Talent: The Abilities and Passions of Joe Biden are Reflected in the Life of Theodosius I

The life of Theodosius I is well documented. In reading his biography, two features in common with Joe Biden were obvious.

First of all, Theodosius I was a fierce advocate and promoter of the Catholic Church. Joe Biden has been proud of being a devout Catholic.

Secondly, Theodosius I was a warrior emperor. Joe Biden, in his long career as a US Senator, has been a “hawk,” in that he has been ready to use military force if the need arose. 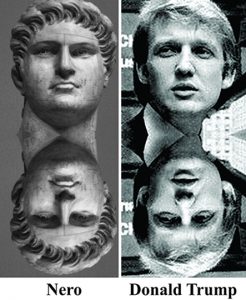 Joe Biden’s Past Life as Theodosius I

If politics seems rough in contemporary times, the life of Theodosius I was much more violent. Though Joe Biden is soft spoken and conciliatory, in his life as Theodosius, he could be brutal.

Theodosius I lived around 350 AD, which was a violent era.

I think the difference is that we do mature across our incarnations on Earth.

To learn of Joe Biden’s life, please go to:

Theodosius I, a Past Life of Joe Biden.

Past Lives of Donald Trump and Vladimir Putin

Past lives of many contemporary politicians have been identified who were also well known governmental figures in past lives. These include:

Donald Trump as the Reincarnation of Roman Emperor Nero

Vladimir Putin as the Reincarnation of Julius Caesar 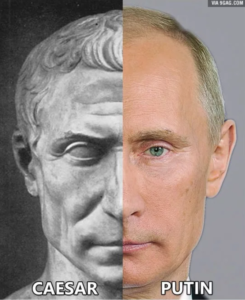 It is natural to ask why the same people rise to major governmental roles across successive lifetimes.

As explained in my book, Origin of the Soul and the Purpose of Reincarnation, when we were created as souls, we were endowed by God with specific attributes.

As politicians incarnate over many lifetimes, they hone their skills so that in subsequent incarnations, they become more successful.

Reincarnation: We Can Be Famous in One Lifetime and Unknown in Another

Though we may have the same talents and abilities across lifetimes, we may be famous in some lifetimes but unknown in others.

For example, a past life for President Donald Trump has been identified in which he was a French governmental official in Eastern Canada when France was colonizing this part of North America, around the era of the American Revolutionary War.

This is why Canada is bilingual, in which French is spoken in the eastern province of Quebec, while the rest of Canada speaks English, as England colonized western parts of Canada.

In sum, one can have the same talents, interests and passions from one lifetime to another, but can be famous in one lifetime and relatively unknown in another.

Physical Resemblance in Reincarnation Cases: There is similarity in the facial features of Theodosius I Joe Biden

Past Life Passions, Talent and Abilities: Theodosius I was a world leader as is Joe Biden