Nobel Laureate Kary Mullis, Who Invented PCR (Basis of DNA Fingerprinting), Supports that He Was Benjamin Rush in a Past Life and that his Wife, Nancy, was Julia Rush: Love Across Two Incarnations 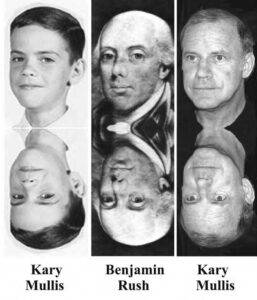 In the year 2000, I was researching a possible past life of my own in which I was incarnate in Boston during the American Revolution. In the process, as I identified past life matches, I noted that facial features, talents and personality traits seemed to remain consistent from one lifetime to another. In addition, I observed that people reincarnate in soul groups to be reunited with those they have loved, known or worked together with in past lives.

During this time, I wondered if  the soul might imprint certain portions of our DNA, which could be used to prove reincarnation through biochemical means. This would not involve traditional DNA fingerprinting techniques, which are based on family genetics.

Rather, the thought is to compare DNA sequencing from one incarnation to another to see if there are sections of DNA that are unique for each soul. The DNA imprinted by the soul, which would remain consistent from one lifetime to another, may be contained in what is called “Junk DNA” that has no known purpose in the human organism.

In August 2000, I learned about a researcher at the Smithsonian Institute who had expertise in DNA testing, whose name is Terry Sharrer, PhD. I contacted him by phone to get information regarding DNA analyses. Keep in mind that in the year 2000, the internet was just getting started and Google did not exist. To get information at that time, one would have to turn to books or human beings.

In the course of our conversation, I related to him my interest in reincarnation and other spiritual topics. Terry then became quite excited and stated that I had to contact a friend of his, Kary Mullis, a biochemist who invented the chemical reaction that is used in DNA fingerprinting, which is called Polymerase Chain Reaction (PCR). Terry then shared that Kary won the Nobel Prize for this invention.

PCR does represent a major breakthrough in biology and medicine, as it ushered in our DNA era. PCR is the basis for the movie series Jurassic Park, in which ancient, preserved dinosaur DNA is found and PCR is used to replicate that DNA to resurrect dinosaurs.

In fact, the invention of PCR is so important that some scientists proclaim that the field of biology and medicine can be divided into two eras, one before PCR and the other after PCR.

After I shared my spiritual interests, Terry said: “You two are kindred spirits.”

He then gave me the home phone number and address of Kary Mullis. Terry advised that before I contact him, I should read an autobiographical book that Kary had written, entitled Dancing Naked in the Mind Field.

I was a little bit shocked that I was given the home phone number and address of a Nobel Laureate who invented a world-changing chemical reaction after a 20-minute telephone conversation with Terry.

When I hung up the phone, I pondered whether Kary was part of my soul group from the era of the American Revolution, since the connection with him was made so swiftly and easily. As I pondered what had just happened and wondered who Kary may have been, one name popped into my mind:

Rush was a leading physician, chemist and patriot during the American Revolution. He was friends with both John Adams and Thomas Jefferson and in fact wrote that these two Founding Fathers were the North and South poles of the American Revolution. Rush is the physician who performed surgery on the daughter of John Adams at their home in Braintree, Massachusetts, who had developed breast cancer (she later perished).

Of interest, in my proposed past life, I knew Benjamin Rush.

Kary Mullis believes in Reincarnation and He can See the Dead

When I read Kary’s book, I understood why Terry had told me that Kary and I were kindred spirits. In addition to having careers in science, we both had interests in spirituality and reincarnation. Kary even ends his book with the following quote:

“The appropriate demeanor for a human being is to feel lucky to be alive and to humble himself in the face of the immensity of things and have a beer. Relax. Welcome to Earth. It’s a little confusing at first. That’s why you have to keep coming back over and over again before you learn to really enjoy yourself.”

Further, in Dancing Naked in the Mind Field, Kary shares a clairvoyant experience that he had when his grandfather, whose nickname was “Pop,” died. He relates that his grandfather passed away in North Carolina while Kary was living in Northern California. Kary states that before anyone had notified him of his grandfather’s death, the spirit of his grandfather appeared in his home. Kary shares that Pop’s spirit remained at his home for a period of two days before departing.

Past Life Talent, Personality Traits and Physical Appearance, as well as Similar Writing Style from One Lifetime to Another 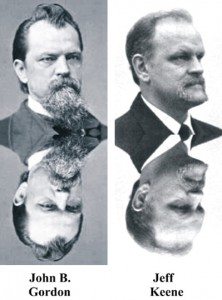 In reading about Benjamin Rush and Kary Mullis, I saw many parallels. Both were leading scientists of their day and both had very iconoclastic, rebellious personalities. I also noted that the structure Kary’s autobiography is similar to one that Rush had written entitled.

For example, Rush’s autobiography is entitled, Travels through Time, while Kary’s title is Dancing Naked in the Mind Field. Note that both titles start with action words, “Travels” and “Dancing,” and that the action occurs in an abstract setting, “Time” and “Mind Field.” To learn of additional similarities, please refer to my book Return of the Revolutionaries.

A reincarnation case in which a linguistic analysis was done that showed similar writing styles across two lifetimes is provided below:

I also noticed that Benjamin Rush and Kary Mullis have consistent facial features.

I mailed a packet to Kary in which I explained that I thought he is the reincarnation of Benjamin Rush and that we had known each other during the time of the American Revolution.

Later, towards the end of 2001, after I was promised a book contract by the publishing company, Hampton Roads, I contacted Kary and asked if I could include him in my upcoming book.

I was very pleasantly surprised when Kary telephoned me and agreed to be featured in Return of Revolutionaries. He even consented to have his wife, Nancy, take pictures of him for image comparisons.

When I was communicating with Nancy Mullis regarding photos of Kary, it occurred to me that she may have been Julia Rush, the wife of Benjamin Rush. There is strong evidence that spouses can reincarnate together to be married again. To learn more, please go to:

Twin Study conducted by Ian Stevenson, MD of the University of Virginia 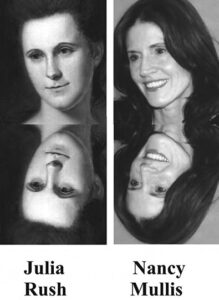 Past Life Relationship: Nancy Mullis as the Reincarnation of Julia Rush

After I shared that she may be the reincarnation of Julia Rush, Nancy promptly sent me a photograph of her, though I then realized that I had never seen an image of Julia Rush and I didn’t know if one even existed. Fortunately, a portrait of Julia Rush was available and I found that Nancy and Julia bear a strong facial resemblance.

In the end, Kary and Nancy felt that their proposed reincarnation cases were valid and they signed written agreements to be in Return of the Revolutionaries. I was very grateful that this world-famous scientist and Nobel Laureate took a chance with me, though we knew this could hurt his reputation. Compared to Kary, I was a nobody. Though I have advanced degrees in science, at the time I was unpublished and unknown. I also have gratitude to Nancy Mullis, who helped facilitate this turn of events.

Kary Mullis died in 2019. In a final correspondence, Kary did reach out to me in 2017 to reflect on the similarities between Benjamin Rush and himself.

To review  similar past life cases, please go to: 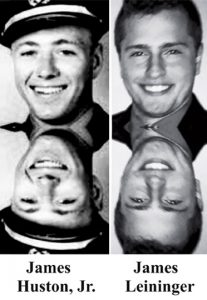 Past Life Passions, Talent and Abilities: Benjamin Rush was a leading chemist and physician in era of the American Revolution, while Kary Mullis invented PCR, which literally has changed the world. Rush and Mullis also have demonstrated similar personalities in being rebellious and iconoclastic.

Relationships Renewed through Reincarnation: Benjamin and Julia Rush reincarnated as Kary and Nancy Mullis to once again become a married couple.

As noted, based on my proposed past life, I knew Benjamin Rush during the era of the American Revolution, which is why I believe Kary and I were brought together in contemporary times.