Martin Luther King as the Reincarnation of Cinque, the Leader of the Amistad Africans, with Past Lives of Coretta King, Jesse Jackson, Andrew Young and other Civil Rights Leaders 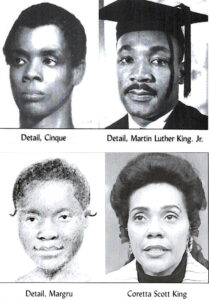 Cinque as the Reincarnation of Martin Luther King

In my first book, Return of the Revolutionaries, I wrote about African natives who were kidnapped and then transported to the Americas to be sold as slaves.

Cinque, a leader of the captured Africans, was able to take over the slave ship, Amistad. They sailed to the United States, where they were arrested.

Cinque was a Gifted Orator, Much Like Martin Luther King

As Martin Luther King, Cinque was a gifted speaker and through the use of a translator, Cinque was able to raise enough money through speeches to finance the return of his people to Africa.

To understand the story of these souls, please view the Stephen Spielberg’s film: Amistad

Reincarnartion research conducted at the University of Virginia has demonstrated that people reincarnate in soul groups, to be reunited with those they have loved in the past and to work on projects and plans made before birth. A most powerful study in this ragards is:

The Amistad Africans reincarnated in the United States to enact societal reform in the 1960’s, under the leadership of Cinque | Martin Luther King.

To review other govenmental cases, please go to:

Physical Resemblance in Reincarnation Cases: There are similarities in the facial features of Cinque | Martin Luther King, as well other Amistad Africans and US Civil Right leaders in contemporary America. To review these image comparisons, please refer to: Return of the Revolutionaries

Past Life Passions, Talent and Abilities: The oratory and leadership skills of Cinque were continued in the life of Martin Luther King.