2: Baikals, Greys and Pleiadeans: The ET Species Manning UFOs Captured on Video by the US Navy and a UFO Photographed by the Italian Navy 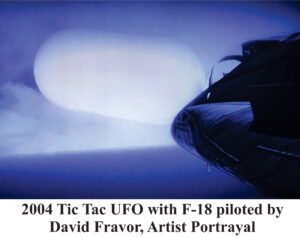 With input from: Spirit Being Ahtun Re channeled through Kevin Ryerson

Click on images to enlarge and to read captions

I became interested in ETs and UFOs when the US Navy confirmed in September 2019 that UFO videos recorded by US Navy fighter pilots were genuine.

I have a unique perspective on these issues as I have been working with trance medium Kevin Ryerson since 2001, who channels a spirit being named Ahtun Re, who has demonstrated the ability to make past life matches with a high degree of accuracy. As described below, Ahtun Re has knowledge regarding ETs and UFOs.

My main interest has been in objective evidence of reincarnation, which shows that we can change religion, race and nationality from one lifetime to another. This understanding will create a more peaceful world, as most conflict and war is based on differences in these cultural markers of identity. ETs are reluctant to contact humanity directly due our tendency to be violent and wage war.

As described in my first article, ETs spiritually evolve through the process of reincarnation, just like humanity. As such, we already have something significant in common.

Ahtun Re has ET Contacts

As noted, Ahtun Re relates that he also has extensive knowledge of ETs and their spacecraft. My first article on this subject, which includes the US Navy videos, is provided below:

ETs, UFOs, Reincarnation, God, Embryology and Templates for Life, with Comments on the Shows “Unidentified” and “Ancient Aliens”

Given the credibility of the US Navy videos, I asked Ahtun Re which ET species pilot the specific UFOs captured on Navy fighter pilot videos.

One thing that I learned in my series of sessions on UFOs with Kevin and Ahtun Re is that numerous ET species work together, both on spacecraft technology and in joint missions.

The situation is very similar to how astronauts of various nations of Earth work together on our International Space Station (ISS).

The Baikals: ETs of Earth’s Oceans and Seas 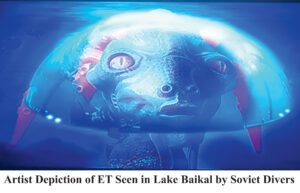 A prominant ET species featured in the US Navy videos, who we will call the “Baikals,” originated from a water planet that orbits a star within our Milky Way galaxy, which we have not yet discovered.

As this species evolved on a water planet, many of their activities on Earth involve our oceans and its aquatic life. Baikals can be considered ET oceanographers.

In fact, these ETs have been observed  by Soviet military divers in Lake Baikal, which in some areas is over 5000 feet in depth and holds one quarter of all the fresh water on Earth. Since this ET species was observed in Lake Baikal, we will refer to them as the “Baikals.”

Lake Baikal is located in southeastern Siberia, near the border with Mongolia. In 1982, the Soviet military was conducting training exercises for scuba divers in Lake Baikal. 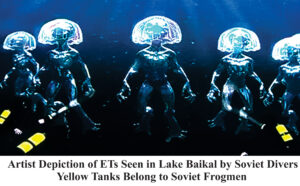 Seven Soviet divers were at about 160 feet below the surface when they noticed that they were being observed by a group of human-like beings that were about 9 feet tall. In the image of the group of Baikals the yellow tanks at the bottom of the image represent the scuba gear of the Soviet divers.

These beings wore tight fitting metallic suits and had helmet like devices covering their heads, though they did not have any tanks that could supply air or oxygen. After a period of time, these strange humanoid beings receded out of sight of the Soviet divers.

After the Soviet divers returned to their ship and reported their experiences with these 9 foot tall creatures, the commander ordered his divers to go back to where they saw these creatures and to capture one of them. The divers were given equipment to aid in this mission, including a large net.

Seven Soviet military divers again descended to about 160 feet below the surface.  These divers once again encountered the 9 foot tall beings. Following orders, one of the Soviet divers tried to capture one of the creatures with the net.

Upon this act of attempted capture, the Baikal ETs used some type of weapon that caused the seven Soviet divers to zoom to the surface in an instant.

This rapid ascent caused the Soviet divers to experience the “bends,” a condition that occurs when surfacing from depths too quickly, causing nitrogen to form in the bloodstream, which can be fatal. After the rapid ascent and incurring the bends, 4 of the divers died and the other 3 suffered chronic health symptoms. The survivors were also emotionally traumatized by their experience.

Note: The artist depictions of the Baikals provided above are from the TV show:

The Pleiadeans and UFO Technology 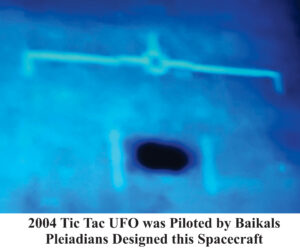 Pleiadeans are some of the most advanced of God’s children. In my first article on ETs, I wrote that on average, ETs achieved artificial intelligence machines, such as a Tesla car, 400,000 years ago.

On the other hand, Ahtun Re has shared that Pleiadeans created artificial intelligence machines over 2.5 million years ago.

In addition, they have memory that goes back for generations and as such, Ahtun Re has labeled the Pleiadeans as the “Librarians of the Universe.”

They are also excellent engineers and work with other ET species on spacecraft development.

Of interest, two crews of the Soviet space station Salyut 7 observed huge angelic beings just outside their space station in 1984. Ahtun Re revealed that these were Pleiadians in their astral or spirit bodies, as described in my first article on UFOs. To learn more, please  go to:

With this introduction, let me now share which ETs were involved in the UFOs videotaped by US Navy fighter pilots:

Ahtun Re related that the 40-foot oval ship described by Commander David Fravor in 2004 as a Tic Tac shaped craft, when he was on maneuvers off the Mexican coast, was inhabited by Baikals. 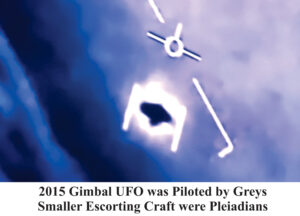 Fighter jet pilots from the USS Theodore Roosevelt aircraft carrier off the southeast coast of United States during 2014-2015 manuevers videotaped a UFO named the “Gimbal” spacecraft, which rotated as it flew at high speed.

Gimbal refers to a device that is affixed to the belly of an aircraft that can rotate to keep a radar or video track of airborne objects while the aircraft itself makes turns.

Ahtun Re has revealed that the Gimbal spaceship was manned by an ET species known as the “Greys.” We will address the Greys in subsequent articles. Ahtun Re said that this Gimbal craft represents an old and obsolete design.

The five smaller UFOs caught on video escorting the Gimbal craft were piloted by Pleiadeans.

In sum, the Tic Tac spaceship observed by Commander Fravor in 2004 was manned by the Baikals. The Gimbal craft viewed in 2014 was occupied by the Greys ET species. The smaller UFOs escorting the Gimble craft were manned by Pleiadeans. 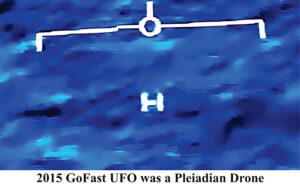 The third UFO craft captured in verified US Navy fighter videos has been called “GoFast,” as this tiny vehicle was seen zooming across the surface of the ocean off the East Coast of the United States.

Ahtun Re related that this was a Pleiadean drone, assessing ocean temperatures. In all, as described in my first article on ETs, they are not here to conquer us. They are scientists who study our planet due to its incredible biologic diversity and they hope they can help us escape mass extinction, which could result from global warming.

As part of the TV show, Unidentified: Inside America’s UFO Investigation, S1, Ep 6-The Revelation, there was a segment that occurred in Sicily in 2004. In this episode, former US military intellgence officer, Luis Elizondo, participated in a meeting with Italian military officials regarding UFO incidents.

Vedruccio related that in 2004, there were  incidents in which houses in the northern part of Sicily spontaneously caught on fire and that evacuations of residents had to be performed.

The local residents reported that energy beams coming from the Mediterranean Sea caused the fires of their homes. 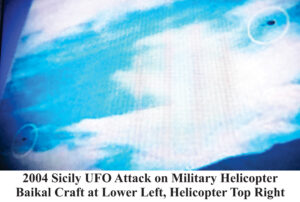 In response, the Italian Navy sent a helicopter to assess the situation. The crew of the helicopter reported seeing a saucer shaped craft behind them, that emitted an energy beam that damaged the rotor mechanism of the helicopter. Though the damage did not cause the copter to crash, damage to the rotor system was photographed.

On the other hand, when the Italian military sent a helicopter to investigate the fires and a saucer shaped craft shot an energy beam that damaged the helicopter rotor apparatus, Ahtun Re said this was an intentional act by the Baikals, not to destroy the helicopter, but to leave evidence of the Baikal’s existence.

Let Us Be Gracious Hosts to our ET Visitors

In general, spacefaring ETs who are technologically far more advanced than us do not want to harm us. One of their other main concerns is the survival of planet Earth, due to global warming which can trigger a mass extinction event. In addition, they are concerned about how humanity will react to their presence.

Because of this concern, the ETs seem to be playing a “cat and mouse” game with humanity. They allow themselves to be seen in innumerable photos and videos taken by military personnel, as well as by ordinary citizens armed with smart phones. They seem to be letting us know that they are here, without posing a threat in the vast majority of circumstances.

It will be a sobering moment when we humans accept the reality that we have celestial neighbors who are much more technologically, spiritually and psychically advanced than we are, who are currently present on our planet.

For a list of ET and UFO articles, please go to: ETs and their UFOs