David Wilcock as the Reincarnation of Thomas Sugrue, the Author of “There is a River” and the Man Who Made Edgar Cayce Famous 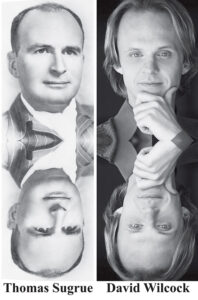 I spent several hours on the telephone with David Wilcock in 2002 regarding his theory that he is the reincarnation of the famous psychic medium Edgar Cayce. I learned about David from Joseph Myers, a Professional Engineer who wrote a book on reincarnation entitled Edward Bellamy Writes Again.

Joseph had met David and was intrigued by his claim to have been Cayce. Joseph was so supportive he even allowed David to stay at his home for several weeks as a guest. David was at Joseph’s house when I had the prolonged phone call with David.

At about the same time that Joe Myers and I were assessing Wilcock, David also went to the Association of Enlightenment and Research (ARE), the organization that was founded to share Cayce’s teachings.

David met with the CEO of the ARE, John Van Auken, and David shared his belief that he is the reincarnation of Edgar Cayce. Mr. Van Auken did not make a judgement on the matter, rather he arranged a 2 hour meeting involving David Wilcock, Edgar Cayce’s son and Cayce’s grandson.

The conclusion of the Cayce family members was that David Wilcock is not the reincarnation of Edgar Cayce. I recall a statement that Cayce’s grandson made that his grandfather was softspoken and humble, very much in contrast with David’s persona.

To view the video in which John Van Auken describes the meeting of the the Cayce family and David Wilcock, which occurs at 1:10 minutes into the video, please go to:

For example, if a psychic tells a person that they were Cleopatra in a past incarnation, it is likely that the client was incarnate during Cleopatra’s lifetime and perhaps even knew her. Cleopatra serves as a “landmark” in time for the client’s past life, though the client was not Cleopatra literally.

In my opinion, this is what happened with David’s belief that he was Edgar Cayce in a prior lifetime.

David Wilcock as the Reincarnation of Thomas Sugrue, the Biographer of Edgar Cayce

I have worked with world famous trance medium Kevin Ryerson since 2001 and found that he channels a spirit being named Ahtun Re, who can make past life matches with a high degree of accuracy.

In this way, the landmark association occurred which led to the mistaken past life match of Wilcock being Cayce. I discussed these issues with both David Wilcock and his coauthor, Wynn Free, well before they published their book proposing the David was Cayce.

An important point is that Edgar Cayce was a trance medium who delivered messages from the spirit world while in a meditative state. David Wilcock is not a medium.

David should be proud of what he has accomplished in his own right and I wish him the best.

To review an article on the reincarnation of Edgar Cayce, please go to:

Physical Resemblance in Reincarnation Cases: The facial features of Thomas Sugrue and David Wilcock are similar, though it appears that Sugrue was older and heavier than is David in their pictures. I believe that David will look more like Sugrue as he ages.

David’s facial architecture does not correspond to that of Cayce.

Past Life Passions, Talent and Abilities: Thomas Sugrue was a published spiritual author and David Wilcock is an intellectual and prolific author on spiritual topics.

Edgar Cayce was not an intellectual, nor was he an author.

Relationships Renewed through Reincarnation: David Wilcock has identified people in his life that he believes were in Edgar Cayce’s social circle in their past lives. It is quite possible that some of David’s friends knew Cayce in their prior incarnations as Cayce and Thomas Sugrue were close associates, who knew the same people.