Actor Ryan Reynolds as the Reincarnation of Silent Movie Star Harold Lloyd, with a Past Life of Joaquin Phoenix and a Contemporary Incarnation of Harry Langdon 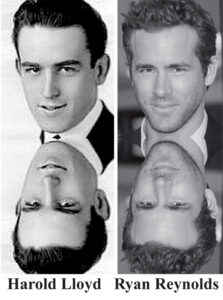 Nicole Arciola as the Reincarnation of Harry Langdon

Nicole Arciola has a special interest in the silent movie era as she herself had an incarnation as a Harry Langdon, a comedic actor of that time. By clicking on her name, provided above, one can review her case. She has proposed reincarnartion cases from that time. As an example, she proposed the following past life match:

Harold Lloyd as a Past Life of Ryan Reynolds

Recently, Nicole proposed that Ryan Reynolds is the reincarnation of Harold Lloyd, which was confirmed in a session with Kevin Ryerson. Nicole pointed out that Reynolds and Lloyd share the same good looks, though the resemblance is not obvious as in many photos as Lloyd is usually captured wearing bulky glasses.

Nicole explained that Harold Lloyd wanted to be a comedic actor, like his peer Charlie Chaplin, but Lloyd was told that he was too handsome to be funny, so Lloyd adopted eyeglasses to look nerdy. Lloyd, by the way, though not as famous as Chaplin, actually made more money through his movies than did Chaplin.

In addition to being humorous in his films, Harold Lloyd also was a daredevil stuntman in his movies. Ryan Reynolds, in addition to performing in his staple of romantic comedies, has also played a superhero role as in his Deadpool movies.

Past Life Passions, Talent and Abilities: Harold Lloyd was one of the most financially successful actors of the silent movie era, as is Ryan Reynolds in the contemporary movie world.