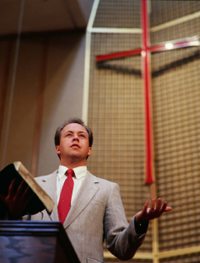 How Case Derived: Hypnosis or Past Life Regression

During Hypnosis or Past Life Regression, Gretchen, a Past Life Personality, Emerges

Carroll Jay was a Methodist Christian minister who started to practice hypnosis in 1954, initially to help people get relief from chronic pain. In the 1960’s, he started to experiment with past life regression.

Dolores, his wife, was having back pain and on May 10, 1970, Carroll conducted a hypnosis session with the aim of relieving his wife’s pain. When, in hypnosis, Carroll asked Dolores, “Does your back hurt?” she replied in German, “Nein,” which means “No.” (1)

In hypnosis sessions conducted over the next few months, Gretchen appeared repeatedly and spoke only German. After 10 such sessions, a native German speaker was invited to participate in a session, who had a conversation with Gretchen in German. On April 23, 1971, Dolores wrote 40 words in German during a manifestation of Gretchen.

Dolores had never learned German and she could not understand or speak German in her normal state of consciousness. As such, this represents a case of xenoglossy, where a person can speak a language that was not learned through normal means. As discussed below, xenoglossy is considered to be strong evidence of reincarnation.

When Ian Stevenson, pictured to the right, heard about this xenoglossy case, he traveled to Mt. Orab, Ohio, where the Jays lived, to research the case. On September 2, 1971, Stevenson, who knew German, participated in a session and had a conversation with Dolores in German. Stevenson enlisted several other German speaking individuals to participate in the hypnosis sessions where Gretchen emerged and they also had conversations with her in German.

On March 25, 1974, Dolores came to Ian Stevenson’s laboratory at the University of Virginia. Dr. Stevenson and a colleague, Ms. Elisabeth Day, had conversations with Gretchen in German. Ian Stevenson and Ms. Day transcribed conversations they had with Gretchen spanning 19 sessions. Six sessions were tape recorded. These transcripts totaled 346 double spaced typewritten pages. Transcripts of sessions are provided in the appendix of Ian Stevenson’s book, Unlearned Language.

Stevenson found that Gretchen spoke 237 different German words in these transcripts. She used 120 specific words before anyone else had said them, which indicates that she was not just mimicking conversation. In one session that was taped, Gretchen introduced 96 German words that were not previously spoken by interviewers, 21 of which neither Gretchen, nor interviewers, had ever spoken before. Stevenson had three different German speakers sign statements that Gretchen was truly speaking German.

As noted, Dolores Jay did not know German, other than a few words such as “Nein,” which most Americans would know. As such, this represents a case of xenoglossy where an individual can speak a language that was not learned by normal means. Ian Stevenson notes that a language must be learned and practiced at some point in time. If a language was not learned in the contemporary incarnation, then it must have been learned in a prior incarnation. 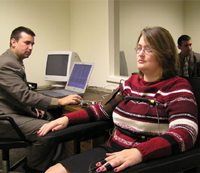 Ian Stevenson went to great lengths to rule out that Dolores may have learned German by normal means. Stevenson even had Dolores undergo a polygraph, or lie detector test, on February 5, 1974. She passed the lie detector test, vouching that she had not learned or known German prior to Gretchen emerging.

Stevenson also interviewed Dolores’s parents, Boyd and Laura Skidmore, as well as her sister, Mary. All three signed statements that no one they knew spoke German and that there were no German speaking individuals in the area where they lived.

Further, Gretchen could converse in German in an interactive way; she could both understand and respond in German. Ian Stevenson terms this form of xenoglossy as “responsive xenoglossy,” which indicates a firm comprehension of the language. In conversations, Gretchen could understand German and English, but she only would speak in German.

Past Life Personality: Who was Gretchen? 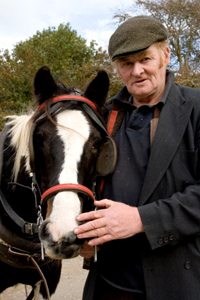 In sessions, Gretchen rarely spoke spontaneously, rather, she replied politely to questions, like a well-behaved girl. She said her name was Gretchen Gottlieb and that she lived with her father, whose name was Herman. She described him as old, with white hair. Gretchen would chuckle when describing her father riding a horse. She said her mother, Erika, had died when Gretchen was 8 years old. She had no brothers or sisters.

Gretchen said her father was the Mayor of Eberswalde, Germany, where they lived. She said that they resided on a street called Birkenstrasse. Gretchen described Eberwalde as a small town with a bakery, butcher shop, church and a college. There was a forest and river outside the town. She also spoke of the cities of Worms and Wiesbaden.

Gretchen related that a housekeeper named Frau Schilder would come to their home to cook and clean. Gretchen stated that Frau Schilder would bring her own four children to the Gottlieb’s home and that she, Gretchen, would play with the children. In fact, she said she spent most of her time in their kitchen, caring for the children. She gave names for the four of them and stated the youngest was three years old.

Gretchen said that she never went to school, which was normal for girls at that time, and that she could not read or write. Gretchen was Roman Catholic and she knew that the Pope was the head of the church. She was opposed to the Protestant Reformation and she referred to Martin Luther several times as a troublemaker. She repeated the phrase, “Martin Luther, betrayer of the people,” several times. (3) 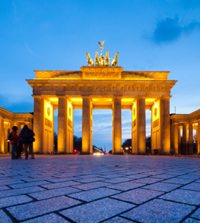 Gretchen repeatedly showed fear and even paranoia when she talked about the Bundesrat. Ian Stevenson noted that the Bundesrat was a cabinet in Germany that was active from 1875-1900, which was powerful in that it had to approve all bills before they became law. Due to her statement regarding the Bundesrat, Stevenson assumed that Gretchen lived in the late nineteenth century in Germany, when the Bundesrat was in existence.

Gretchen said that she was dead by the age of 16. She said she had a serious illness with the primary symptom of headache. She would put her hand to her head and made a facial expression which conveyed suffering.

Like in the Sharada | Uttara Huddar case, at times Gretchen did not seem to realize that she was dead. In some sessions, Gretchen thought that she was speaking to interviewers on the street near her home. She would plead to the interviewers, such as Stevenson, that she had to go home, as her father would be upset if he found she was talking to strangers.

As such, this represents another case in which it appears that a soul has retained a past life personality intact.

Ian Stevenson tried to confirm Gretchen’s statements. As noted, she did discuss the Bundesrat, which was indeed a cabinet in Germany that was active from 1875-1900.

The town of Eberswalde did exist, but there was no mayor by the name of Gottlieb on record. Stevenson reasoned that her father may have been a lesser official or that Gretchen may have been an illegitimate daughter of a Mayor of Eberswalde, who was given the name Gottlieb after her birth. It is also possible that Gretchen was speaking of a different town called Eberswald, which eventually was incorporated into a larger city.

Ian Stevenson raised the issue that the Gretchen Gottlieb | Dolores Jay case may represent a case of possession, where Gretchen was a discarnate spirit who temporarily took over the body of Dolores Jay. This issue of reincarnation versus possession was discussed in some detail in the Sharada | Uttara Huddar xenoglossy case. 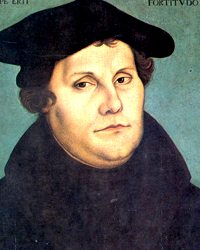 Two incidents support reincarnation as the explanation for the xenoglossy of Dolores Jay. First, in 1968, Dolores had a dream which occurred a year before Gretchen emerged. In this dream, Dolores saw a young girl sitting in a saddle on a horse, with an older man on foot. A crowd had gathered consisting of angry people with sticks and stones. A man burst through the crowd and grabbed the bridle of her horse. At that point, Dolores awoke.

This dream is reminiscent of scenes Gretchen later described regarding her life. Gretchen described her father as an elderly man with white hair and she chuckled when she described him riding a horse. She also called Martin Luther a trouble maker and a “betrayer of the people.” The crowd’s anger in the dream could reflect conflict related to the Protestant Reformation in Germany, which Martin Luther led. An image of Martin Luther is provided to the right.

Memories of past lives often occur in the dream state and as such, this dream would support reincarnation as the explanation for the xenoglossy that Dolores later would demonstrate.

Secondly, during a hypnosis session, Carroll Jay instructed Gretchen to have a vision that Dolores could describe in English. Dolores then said, in English, that she saw herself being taken away to a city far away. There, she saw a man speaking at a church. Mounted policemen then dispersed the crowd. A young girl and an older man, presumably Gretchen and her father, became frightened and ran away.

When her husband asked Dolores who the young girl in the vision was, Dolores said, “It was me.” (4)

Having worked with Carroll and Dolores Jay for several years on this xenoglossy case, Ian Stevenson was able to get to know them very well and he became convinced that they were being honest and forthright in their statements. He noted that for Dolores, as a Christian, reincarnation conflicted with her belief system. Her husband, Carroll, observed that Dolores was “bewildered and a little scared,” by her ability to speak German. (5)

Carroll Jay also struggled with his wife’s xenoglossy, as it make life difficult for him as a Methodist Christian minister. On January 20, 1975, the Washington Post published a newspaper article on the xenoglossy demonstrated by Dolores. When their community members read the article, some of them accused the Jays with dealing with the devil.

Overall, Ian Stevenson, MD, saw no reason for the Jays or their family to make false statements and he believed this to be a legitimate xenoglossy case. If reincarnation is indeed accepted as the explanation, we see how talents, including the ability to speak a language, can be conveyed from one incarnation to another.

Further, as Gretchen emerged with her personality intact, along with the observation that at times she didn’t realize that she was dead, this case demonstrates how the soul can retain its personalities. This phenomenon was also observed in the Sharada | Uttara Huddar and Jensen Jacoby | TE reincarnation xenoglossy cases and is discussed in Origin of the Soul and the Purpose of Reincarnation.

Responsive Xenoglossy: Dolores Jay under hypnosis could speak and respond in German, a language she did not understand in her waking consciousness. It appears that Dolores accessed this ability from a past lifetime as Gretchen.

Retention of the Personality with the Soul: When Gretchen emerged, she acted like a well-behaved young girl. Indeed, like in the Sharada | Uttara Huddar case, at times Gretchen did not seem to realize that she was dead. In some sessions, Gretchen thought that she was speaking to interviewers on the street near her home.

Change of Nationality and Religion: Gretchen was German, while Dolores was a citizen of the United States. Religious affiliation has also changed, as Gretchen was very much aligned with the Catholic Church and against the Protestant Reformation. In contrast, the Jays were Methodist, which grew out of the reformation movement in England.

Please note that the photographs provided above representing Carroll and Dolores Jay, as well as Gretchen’s father, are not historical images, rather, these are dramatizations.