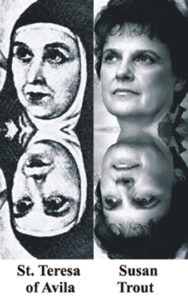 Susan Trout as the Reincarnation of Saint Teresa of Avila

Forty years ago, I was told by a seer that I was a reincarnation of Teresa of Avila.  This meant nothing to me at the time as I was raised in a fundamentalist Christian church and told that only men saints mentioned in the Bible were true saints.  Knowledge about a Teresa incarnation came at a time in my life when I was in deep despair.  Being told that I had once been a saint did not match my desperate state or my spiritual awareness.  Nevertheless, I viewed the information as a message of hope.  Subsequently, I have been told of my Teresa incarnation by other spiritual teachers, intuitives, gurus and Light Workers.  I finally decided there was a reason I needed to learn about Teresa’s life, which occurred some 500 years ago (1515-1582).

Much has been written about Teresa’s life in Spain as a vigorous reformer of the Carmelite Order and a disciplined explorer of mystical experience.  She had a gift for administration and a passion for direct conversation with God.  She was considered willful, quirky, vain and visionary.  She had a “mind of her own” and a fierce determination to go against Vatican control and establish convents to perpetuate her reform.  Whenever I connect to Teresa, I sense the depth of her inner struggles and her profound desire to transcend her personality “quirks” and join God. I sense the truth that exists beneath her writings and beyond what others write about her.  Her life was too much of a struggle for her to believe she was special in any way.

Past Life Talents and Personality Traits

The following aspects of Teresa’s nature seem to be part of my own.  Some of what Teresa left undone in her spiritual life 500 years ago is what I seem to be determined to do in my own life.  I brought some of her gifts and challenges forward into this life.

Spiritual Life: Like Teresa, devotion to God has been the primary focus of my life; all I have ever wanted to be was a willing instrument of God’s Love in service to humanity. In my youth, I withdrew from organized Christianity because I felt it kept me “in kindergarten.”  Eventually, I found my spiritual home in Eastern Traditions and in metaphysics/Ancient Wisdom.  I am broad-minded and effortlessly understand universal spiritual experiences and psychological and soul development.  I recognize the validity of someone’s psychological and/or spiritual experience even if I can’t recall ever having that experience myself (in this life).  Even as a youth, people described me as a very “deep” person, perhaps a Teresa quality.

Writing: I have written two books that I feel are sequels to Teresa’s The Interior Castle.  I have had a lifelong interest in understanding soul development, leadership and service.  I felt inspired to write about soul development and service, taking Teresa’s castle metaphor of the soul to its next step.  I wrote Born to Serve: The Evolution of the Soul Through Service in 1997 and The Awakened Leader: Leadership as a Classroom of the Soul in 2005.

Physical Likeness: Much is written about Teresa’s attractiveness and the fact she did not age until a year before her death at age 68.  No photograph exists of Teresa; a painting was done when she was in her early 60s, about which Teresa commented that because the painter made her look ugly, she would accept it as an opportunity to develop humility.  Authors write often about the beauty of her skin, eyes, hands and feet.  As long as I can remember, people have “made a big deal” about the beauty of my skin, eyes, hands and feet.

Determination: I join Teresa in being described by others as having an extremely strong and developed will and a determination that defies description.  Like Teresa, I am determined to follow my vision and bring it into reality by integrating psychological principles, spiritual ideals and right action.

Nun-Likeness: Throughout my life, colleagues, students and friends have told me I look like a nun, act like a nun, and lead like a Mother Superior. Catholic nuns I know claim I lead organizations like a true convent, evidenced by stressing coherence of universal psychological and spiritual principles with action in the world and by holding high standards for myself and for others.  Unlike Teresa, I am not an extrovert nor do I have a buoyant personality.  I tend to “hide” my Light… this is in contrast to Teresa, who was expressive in a dramatic way.  I feel this shift is an attempt to balance outer and inner energies.  Also, I have had to learn how to balance care of self with care of others; Teresa sacrificed her own needs for others and I have the same strong tendency.  This imbalance adversely impacted Teresa’s physical and emotional health as it has mine.

Reformer: Just as Teresa was a founder and leader of the reformed Carmelite order, I have been a reformer, leader and founder of departments, personal growth and healing methodologies, professions and organizations.  Like Teresa, I am intensely driven to bring what is off-course back into integrity with its true course.  Teresa, however, at times lowered her standards with those she felt would financially support her convents. In this life, I have refused to lower my ethical standards for any reason.  This has not made me popular at times for difficult decisions I have had to make, especially in the workplace.

Leader, Organizer, and Administrator: Like Teresa, I am described as incredibly organized and having a sixth sense for how to found, direct, and administer an organization. My parents claim I was “born organized” and my colleagues say I run a “well-oiled machine.”  Nothing misses my eyes and their appreciation for the blending of detail with beauty.

Women: As a helping professional and as a trainer of professionals in both  university and non-profit settings, I have been surrounded by women.  I am often their counselor, guide and teacher.  Teresa felt she neglected the care and well-being of many of her nuns as funds were not always available and she could not regularly visit and oversee the well-being of the nunneries she founded.  This lifetime, I have felt I had karma with many women (former nuns?) and have wanted to correct these relationships.  At times, I have confronted a person on an issue in this life because I had neglected to do so in Teresa’s life.  I have never wanted to be part of a school of thought with multiple centers because I understood that it was nearly impossible to ethically oversee their well-being.

Men: Much has been written about Teresa’s attraction to men and they to her; she was believed to manipulate men often and they her, so that she would obtain the needed funds and housing for her convents.  In this life, I have attempted to develop healthy working relationships with men and learn to understand and respect them.  I am steadfast in not tolerating unethical behavior on the part of men.  Except for a brief marriage, I, like Teresa, have not chosen a life path of marriage and children. 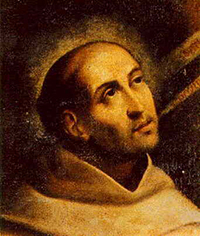 John of the Cross: Juan de la Cruz, a Carmelite monk, was twenty-five and about to become a hermit in the Primitive Rule of his order when he met fifty-year-old Teresa.  Teresa persuaded him to head her monastic foundations and be her strong right arm in managing the convents.  He eventually became her spiritual director. They were known to love and respect one another dearly, despite their differing natures.  Marcelle Auclair, one of Teresa’s most insightful biographers, compared the two: “For her, to love was to act.  For him, to love was to immerse oneself completely in contemplation.”  After her death at age 68, Juan de la Cruz assumed leadership of the convents to ensure her work would continue.

In 1982, I met a well-known and respected spiritual teacher whom I immediately recognized as John of the Cross.  We have since spoken of the Teresa-Juan incarnation.  In this life, I seek his counsel much as I did when he was Teresa’s spiritual director 500 years ago.  I respect his wish not to be named.

Conclusion: The Teresa incarnation has been a way-shower for my spiritual development in this life.  It has helped me stay on purpose with my soul development and service and not get lost in the material world.  I can choose to evolve and be aware of patterns that disrupted my spiritual growth in a previous life and seek to dissolve them in this one.  Remembering Teresa is remembering my True Identity. 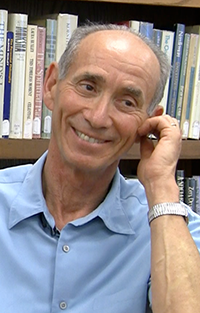 Kenneth Wapnick as the Reincarnation of St. John of the Cross

Note from Walter Semkiw, MD: During his lifetime, Kenneth Wapnick, PhD did not want his past life as Saint John of the Cross made public, as described by Susan Trout. Since he has passed, I am posting his reincarnation case.  Dr. Wapnick was instrumental in the creation of the book and spiritual system known as A Course in Miracles.

Physical Resemblance: Susan Trout has commented on the similarity of several physical features of Teresa and her own features.

Past Life Talent and Behavior: Susan has noted multiple similarities in talent and personality between herself and Teresa.

Relationships Renewed through Reincarnation: The spiritual partnership between Teresa of Avila and John of the Cross was renewed in the friendship of Susan Trout and Kenneth Wapnick.