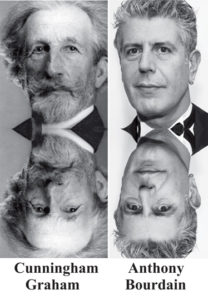 Joseph Conrad and a Past Life of Anthony Bourdain

I have been of fan of Anthony Bourdain for many years. I enjoy the travel aspect of his shows, as well as his keen intellect, irreverent sense of humor and honesty. As I was watching one of his programs he referred to Joseph Conrad’s novel, Heart of Darkness. At that moment, I had the intuition that in a past life, Bourdain had something to do with Conrad.

At first I though that he may have been Joseph Conrad in a past lifetime, but when I read about Conrad, I realized his personality was opposite to that of Bourdain. When I read that Conrad had a good friend named Robert Bontine Cunninghame Graham, I noted that Graham was very much like Bourdain, in both personality and appearance. In a session with Kevin Ryerson, the spirit being Ahtun Re affirmed that Anthony Bourdain is the reincarnation of Robert Bontine Cunninghame Graham. Place your cursor on images to enlarge them.

Graham was born in London, England. After finishing his education in Europe, Graham, like Bourdain, became an adventurer and explorer.  He traveled to Argentina, where he made a great deal of money in the cattle ranching business. Bourdain, by the way, was an unabashed carnivore. Graham also traveled to Morocco, Spain, Mexico and Texas.

Graham was a liberal and a socialist who was elected to the British Parliament. Anthony’s political and societal views were also very liberal. In a most intriguing correspondence, Graham was fond of cursing and he was the first Member of Parliament to be suspended from the House of Commons for swearing (he used the word “damn”). Bourdain is known for swearing on his show, though his curse words are censored on his television programs.

Graham was also a prolific author. Bourdain is the writer of his show and he is a published author. Graham was a friend of Joseph Conrad and in fact, it was Graham who helped Joseph Conrad get his career started by introducing Conrad to Graham’s publisher, Edward Garnett. 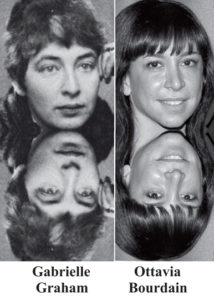 In Mexico City, Graham taught fencing. Similarly, Boudain competed in the martial art Brazilian jiu jitsu. His ex-wife, Ottavia, is also a competitive practitioner of jiu-jitsu. Of interest, Ahtun Re has affirmed that Ottavia is the reincarnation of Graham’s wife, Gabrielle Chideock de la Balmondiere. A physical resemblance exists between Gabrielle and Ottavia.

The world was stunned when it was learned that Anthony Bourdain committed suicide on June 8th, 2018, much as the world was dismayed by the suicide of Robin Williams. On one of his recent shows, Bourdain admitted that though he seemed to have it all, he did not feel that “life is good.” Bourdain also admitted that he became suicidal after separating from his first wife, Nancy Putkoski. He also had a history of extensive drug use.

These are signs of biochemical depression, which can make people feel so bad emotionally that the desire to end one’s life can arise. Medications and psychotherapy can reverse such feelings and every effort should be made to seek out treatment. In the United States, help can be accessed through the:

An essay on ending one’s own life and reincarnation is provided with a suicide case researched by Ian Stevenson, MD of the University of Virginia, involving a man named Ruprecht Schultz. A link to this case, as well as a link to a reincarnation case involving Robin Williams, are provided below:

There are a number of reincarnation cases published by Ian Stevenson, MD that involve suicide. These can be reviewed through the link provided below:

Past Life Talent & Behavior: Like Anthony Bourdain, Graham was a world traveler and adventurer, a liberal and a published author who was known to use curse words.

Relationships Renewed through Reincarnation: Robert Bontine Cunninghame Graham was married to a woman named Gabrielle, who has been identified in contemporary times as Anthony Bourdain’s ex-wife, Ottavia.

Change of Nationality: Graham was born in England, whereas Anthony Bourdain was born in New York City.