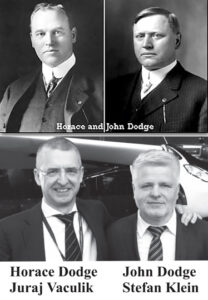 Revealed and Affirmed by: Spirit Being Ahtun Re in a Ryerson-Semkiw Reincarnation Research Session

The Dodge brothers, Horace and John, were pioneers of the automobile industry in the United States. The started as machinists who provided parts to early car manufacturers, such as Ford, then they founded their own auto company and produced their first car in 1917. The brothers both died of influenza in 1920. Dodge, the company, continues to produce cars to this day and they are known for producing performance cars powered by Hemi engines.

I have always enjoyed driving fast, muscular cars. When I was a teenager, my father bought a Dodge Charger which I loved to drive. In my adult life, Dodge Chargers and Dodge Challengers have been among my favorite cars to rent when I travel.

I own a Pontiac Grand Prix GT, which is a performance car built by General Motors, and I had a Fiat Spyder 2000 fuel injected, double overhead cam, sports car for over 30 years. I could make the tires of my Fiat squeal even in second gear. I had to give up my Spyder when it could not pass California emission standards.

Past Life Connections Renewed through Reincarnation 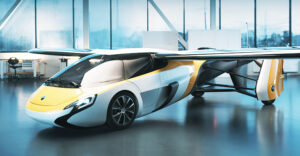 Reincarnation research shows that souls plan lifetimes to be reunited with loved ones in Earth incarnations. Some of the most convincing evidence involves childhood past life memory cases researched by Ian Stevenson, MD of the University of Virginia.

Stevenson studied 31 sets of twins, who in childhood, remembered past lives in which they had significant past life relationships, which were objectively validated. To review this twin study, please go to:

In addition, reincarnation research also indicates that souls reincarnate with similar talents and passions. To learn more, please go to:

Knowing that souls plan to reincarnate with loved ones, I wondered whether the Dodge brothers have reincarnated in contemporary times. I have worked with world-famous trance medium Kevin Ryerson on a regular basis since 2001. Kevin channels a spirit being named Ahtun Re, who has demonstrated to me that he can make past life identifications with a high degree of accuracy.

In a session with Kevin, I asked Ahtun Re if the Dodge brothers have reincarnated in contemporary times. Ahtun Re told me that they have returned to life in Eastern Europe and were developing a flying car. With a little research, it appeared that the best candidates were Jaraj Vaculik and Stefan Klein of Slovakia, a country that was part of Yugoslavia before member countries declared their independence after the fall of the Soviet Union.

In a subsequent session with Kevin Ryerson, Ahtun Re affirmed that the Dodge brothers have reincarnated as Jaraj Vaculik and Stefan Klein.

Past Life Talent, Behavior and Abilities: The Dodge brothers were pioneers in the American automobile industry and Jaraj Vaculik and Stefan Klein are leaders in the emerging field of flying cars.

Relationships Renewed through Reincarnation: Horace and John Dodge were brothers and they have reincarnated as founding partners in AeroMobile.

Change of Nationality: The Dodge brothers were born in the United States, while Juraj Vaculik and Stefan Klein are Slovakian. Understanding that souls can change religion, nationality and ethnic affiliation from one lifetime to another can help create a more peaceful world, as most conflicts and wars are based on differences in these cultural markers of identity.