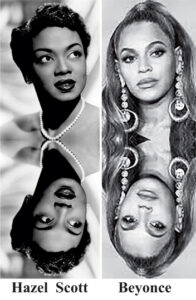 The Life of Hazel Scott

One day, while on the Internet, I stumbled upon an image of Hazel Scott. I noted a rather uncanny resemblance between Scott and Beyoncé. Upon reading a biography of Scott, I noticed that she shared many talents with Beyoncé. Subsequently, in a session with world renown trance medium Kevin Ryerson, Ahtun Re, a spirit guide channeled through Kevin who has demonstrated the ability to make past life matches with a high degree of accuracy, affirmed that Beyoncé is the reincarnation of Scott.

Hazel Dorothy Scott was born on June 11, 1920 in Trinidad, a Caribbean island just north of Venezuela. She was a musical prodigy and to develop her talent, Hazel’s mother took her to New York City when she was 4 years old. Starting at the age of 8, Hazel was awarded scholarships to study music at the famed Julliard School.

In her career as a singer, Hazel became one of the most recognized, celebrated and wealthy musicians of her era. She was the first woman of color to have her own television show in the United States.

Beyoncé Giselle Knowles-Carter was born on September 4, 1981, about a month before Hazel Scott died. As such, this represents a case of split incarnation, a reincarnation case in which a soul inhabits two human bodies at one time. Ian Stevenson, MD, of the University of Virginia termed these “cases with anomalous dates,” as lifetimes overlapped.

Beyoncé was also a child prodigy singer and musician. She has sold over 100 million records and has won 23 Grammy Award. 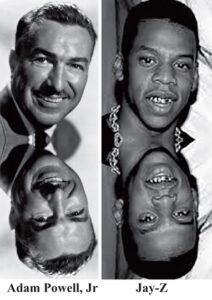 Beyonce’s husband is the ground breaking rapper Jay-Z, whose real name is Shawn Corey Carter. Oftentimes, married couples reincarnate together, so it was natural to wonder if Jay-Z is the reincarnation of Hazel Scott’s husband, Adam Clayton Powell, Jr. Though I noted a physical resemblance between Jay-Z and Powell, their talents and life paths seemed different.

Powell was a Baptist minister with no background in music that I could find through online resources, while Jay-Z is a world-famous rapper, musician and music producer. On the other hand, Powell was a Baptist pastor in Harlem, New York City. As such, his role as the church’s minister must have involved a great deal of music and singing.

Ahtun Re affirmed that Jay-Z is the reincarnation of Hazel Scott’s husband, Adam Clayton Powell. When I pointed out the discrepancy between the talents and careers of Powell and Jay-Z, Ahtun Re noted that rap is about rhythms of the spoken word and that Baptist preachers also are known for this ability.

Physical Resemblance in Reincarnation Cases: There is a striking resemblance between Hazel Scott and Beyoncé. There is also a similarity in the facial features between Adam Clayton Powell, Jr and Jay-Z.

Past Life Talent and Abilities: Hazel Scott was a child prodigy musician and singer, as is Beyoncé. Adam Clayton Powell was a renowned minister, who used the spoken word in rhythm, much like the rapper Jay-Z.

Relationships Renewed through Reincarnation: There is ample evidence that souls plan lifetimes to be reunited with loved ones from past lives.

The Twin Study conducted by Ian Stevenson, MD from the University of Virginia demonstrates this point dramatically.

Hazel Scott was married to Adam Clayton Powell, who has reappeared in Beyonce’s life in the persona of Jay-Z.

Split Incarnation: Beyoncé was born a month before Hazel Scott died. As such, this is a case of split incarnation, where a soul inhabits more than one human body at a time. Ian Stevenson, MD of the University of Virginia called these “cases with anomalous dates,” as lifetimes overlapped in time.