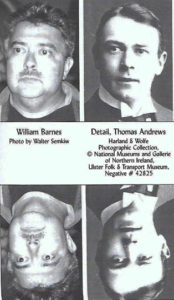 From: Thomas Andrews, A Past Life Memory, by William Barnes

William Barnes is the author of Thomas Andrews, A Past-Life Memory. Barnes started having spontaneous past life memories when he was a child. In his book, he writes:

“At the age of four, I drew a ship with four smokestacks and told my parents, ‘This is my ship, but she died.’ I insisted my mother call me ‘Tommy’ and spoke of two brothers, a sister, aunts and uncles, none of whom my parents knew. There were also relentless nightmares-a huge ship little looming above me, piercing screams, heated arguments, the frigid water stabbing at my body, a peach-colored mass of steel falling on me-and, again and again, I would wake up crying.”

Through Past Life Regression, a Past Life Name is Recalled

“At age 25, I moved to Washington DC, where I sought the help of a counselor who used hypnosis as a means of relaxation. During the session, I heard myself arguing about ‘the ship’s design.’ At the instant I came out of the trance, I sat up and said ‘my name is Tommy Andrews.’ It was the first time I had heard the full name.

At age 38, I got married for the second time, and with my new wife, Mary Ann, moved to Arizona. Late one night, I woke Mary Ann as I argued loudly in my sleep, calling out names she didn’t recognize, all the while speaking with a pronounced accent.

Subsequently, the ongoing nightmares pulled me into a deep depression. My professional and personal life deteriorated, my self-esteem evaporated, and I contemplated suicide in the desert. After being ordered to seek help, I began an odyssey of physical, psychological, and psychiatric evaluations. In 1997, I was referred to Dr. Frank Baranowski, a psychologist who had used hypnotic age regression with great success in helping people overcome phobias.”

Barnes also writes of his state of mind at the start of regression sessions with Dr. Baranowski. “This will never work,’ I thought, smiling inwardly. ‘That was my last conscious thought.’”

However, the past-life therapy did work and the sessions helped William Barnes take ownership of his life once again. The sessions were recorded and excerpts are featured in an audio book called A Past-Life Interview with Titanic’s Designer, by William Barnes and Frank Baranowski. On it, one can hear Barnes speaking in Tommy Andrew’s heavy Irish accent as he describes the ordeal of Titanic’s sinking and he relives his death on the deck of the great ship.

The case of William Burns illustrates how the Universe, or spiritual world, provides meaningful symbols and sets up synchronistic events to give us hints regarding our past life identities, destinies and purposes. As an example, William Barnes was born on April 14, 1953, the anniversary date of the sinking of the Titanic. Barnes was born on the date that the Titanic sank, 41 years after the incident. Interestingly, Titanic’s hull number was 401, which embodies the number 41. Further, on the day that Barnes was born, the first movie version of Titanic was released.

How do these symbolic and synchronistic events occur? With regard to Williams Barnes’ birth on the anniversary of the Titanic’s sinking, I believe that one’s soul or higher self can influence the date of birth, just as one’s death can be timed. This latter phenomenon is reflected in the deaths of John Adams and Thomas Jefferson on the 50th anniversary of the Declaration of Independence.

In addition to reading his book and listening to his audiobook, please visit William Barne’s website, which has interesting information regarding the Titanic, such as its horn, and excerpts from his past life regressions.

Physical Resemblance in Reincarnation Cases: There is a similarity in facial bone structure between Andrews and Barnes, though Barnes is heavier than Andrews.

Past Life Talent and Knowledge: In his book, Barnes describes how he has innate knowledge of shipbuilding design used in the era of Titanic, which he did not learn by normal means.