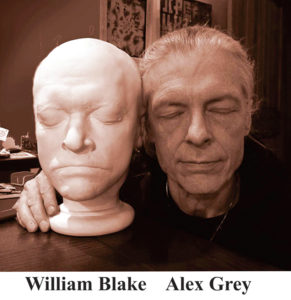 Affirmed By: Spirit being Ahtun Re in a Ryerson-Semkiw Reincarnation Research Session

It is difficult to adequately communicate the fascinating parallels and connections that run through and reverberate from the life and work of William Blake and Alex Grey. That Alex Grey is a modern day “lineage holder” in the same tradition of sacred visionary art pioneered by William Blake has always been an obvious and visible fact.  Beyond a visual tour of the artwork of Blake and Grey, a reading of Grey’s Mission of Art, his website, or many of his interviews offer a window into the philosophical and spiritual dimensions that inform his output.

On the subject of his other incarnations, Grey himself has actually felt a connection with another visionary artist, the 20th century Belgian Symbolist Jean Delville.  While I had suspected a link between Grey and Blake for some years, I had never really looked into it, and it was during a random stroll through the internet that I discovered a post in which Alex Grey was celebrating the birthday of William Blake at his Chapel of Sacred Mirrors, and it just happened that their birthdays are only one day apart, making it a kind of shared celebration.  Displaying a bust of Blake and honoring Blake’s importance in his work, I instantly realized that in Grey and Blake, I was looking at two emanations of the same soul.

Physical Appearance in Reincarnation Cases: Grey and Blake share an above average similarity of appearance, which is especially so in the eyes and the nose.

Past Life Talent: Although he certainly put work into developing as an artist in this life, the ease and naturalness with which he quickly stepped into his role as one of the world’s preeminent visionary artists points to deep practice and experience derived in other lives devoted to artistic endeavors. If there was an Alex Grey of the 18th century it was William Blake and vice versa.

Anniversary Phenomenon : While they weren’t born on the precise same day, their births on back to back days seems slightly more than coincidental.

Change in Nationality: Blake was born in England while Alex Grey is a native of the United States.