Robin Williams as the Reincarnation of Will Rogers 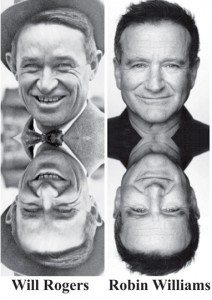 Robin Williams committed suicide during the evening of Sunday, August 10 or the early morning of Monday, August 11, 20 14. A few days after this tragic event, a Reincarnation Research supporter sent me a message with the hypothesis that in the past lifetime, Robin Williams was the great American humorist and movie star, Will Rogers. Will Rogers was one of the most famous celebrities of the 1920s and 1930s.

In looking at images of the Rogers, I was very impressed by the physical resemblance between the two. In fact, one can almost see Robin Williams in the eyes and smile of Will Rogers. Also, in reading some of Will Rogers’ most famous quotations, one can almost hear Robin Williams saying the same things. Place your cursor over images to enlarge and use arrow keys to scroll up and down on the image.

In a session with Kevin Ryerson which took place on August 16, 2014, Ahtun Re, the spirit guide channeled through Kevin who has demonstrated the ability to make past life matches with a high degree of accuracy, affirmed that Robin Williams was the reincarnation of Will Rogers.

Robin Williams’ Interest in Reincarnation Research & What Dreams May Come 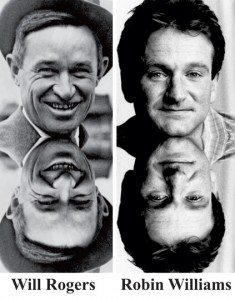 I happen to know that Robin Williams was very interested in reincarnation. The way this knowledge came about is that I met an individual in August 2013 who had created one of the early Internet E-mail providers, such as Hotmail or Yahoo. His company was then purchased by a venture capital group, which allowed this hi-tech entrepreneur to retire at an early age.

Hoping that this person may be interested in financially supporting ReincarnationResearch.com I showed him the our website. I explained that independently researched reincarnation cases, including cases studied by Ian Stevenson, MD at the University of Virgina, demonstrate that individuals can change religion, nationality and ethnic affiliation from one incarnation to another. I pointed out that understanding of this observation can help create a more peaceful world, as most conflicts are based on differences in these cultural markers of identity.

I then showed this hi-tech entrepreneur the Evidence of Reincarnation video, which I had put up on You Tube on May 21, 2013. This video centers on the reincarnation research of Dr. Ian Stevenson at the University of Virginia Over a period of 40 years, Dr. Stevenson studied young children who had spontaneous memories of past lifetimes. In approximately 1200 Stevenson cases, the children’s past life memories could be objectively validated. In my opinion these cases, in aggregate, provide proof of reincarnation

After watching the Evidence of Reincarnation video, which has had millions of views, the hi-tech entrepreneur became quite excited and stated that a person who he lives next to is very interested in reincarnation research and has spoken of Ian Stevenson. 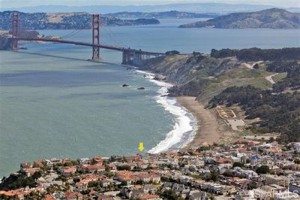 As we parted, this individual reiterated that he was sure that Robin Williams would contact me. I gave the hi-tech entrepreneur my Born Again and Origin of the Soul books to forward to Robin, along with my contact information. Much to my disappointment, Robin Williams never did get in touch with me.

Of interest, Robin Williams starred in a movie, What Dreams May Come, which deals with suicide and reincarnation. Robin also had a joke about reincarnation which has received much publicity. He said, regarding reincarnation: “With my luck I will come back as myself.” This is a funny, albiet true, statement.

To review other reincarnation cases involving suicide, go to:

Is Mental Illness Continued from One Lifetime to Another through Reincarnation?

Though in the end, Robin Williams developed a neurologic disease which appears to have made is life intolerable, he also suffered from biochemical depression and he may have also had bipolar disorder, also known as manic-depressive illness. Both of these conditions are caused by an imbalance of neurotransmitters in the brain. Will Rogers, on the other hand, does not appear to have had a history of depression or bipolar disorder. As such, if this reincarnation case is accepted, it appears that mental illness is not a quality of the soul and is not continued from one lifetime to another. Rather, these conditions appear to be related to an individual’s genetic inheritance.

The media has reported that family members of Robin Williams, including his children, have received hostile messages regarding Robin’s suicide. Hostility is generated by the point of view that Robin had everything one could want, such as a loving family, worldwide fame and wealth. With so many riches, how could he commit suicide? A similar reaction occurred with the suicide death of Kurt Cobain, the late lead singer of the rock group Nirvana. 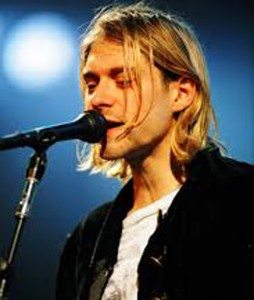 This hostility and lack of empathy for suicide deaths stems from the inability of those who have not experienced depression to imagine how somebody could possibly feel so bad to commit suicide. Very simply, when an individual has severe biochemical depression, that person can experience a total lack of enjoyment in life, as well as profound despair. Only somebody who has experienced severe depression can fully understand it.

The psychological term for the feeling one experiences in depression is “anhedonia,” in which an individual does not experience any joy or pleasure in life. It should be noted that in the vast majority of depression cases, anhedonia can be successfully treated with anti-depressant medications. For individuals who do not respond to medications, ECT (Electroconvulsant Therapy), also known as electroshock therapy, can be of benefit.

Unfortunately, whether appropriate treatment is not taken advantage of or if treatment does not succeed in controlling anhedonia, people commit suicide as they can no longer tolerate feeling the way that they do. They perceive suicide as being a method to relieve themselves of depression and despair.

Individuals who experience depression must be open to taking medications that will modify the neurochemistry of the brain to relieve anhedonia. Rather than criticize those who succumb to suicide, we must have empathy for the person who feels so bad that they feel they cannot continue living.

Is Suicide Justified in Light of Evidence of Reincarnation?

Though I do urge empathy and understanding for those who do commit suicide, I do not believe that suicide is a wise choice and that suicide does have karmic implications. Once again, to review these issues please go to:

In sum, based on reincarnation research, Robin Williams will not be eternally damned or go to hell. Rather, he will reincarnate and be the same comic genius as he was in his lifetimes as Will Rogers and Robin Williams. He will likely have to deal with karma related to committing suicide, including the grief he caused loved ones, but the progress of Robin’s soul will continue. Hopefully, he will not be born with similar biochemical afflictions in the future. One should keep in mind that Robin had a big heart and did much good for people in need, so he does have positive karma, which will help balance the negative karma incurred by committing suicide.

Physical Resemblance in Reincarnation Cases: There is a marked resemblance between Will Rogers and Robin Williams.

Past Life Talent: In may ways, Robin Williams replicated the career of Will Rogers in becoming a comedian, actor and world-renown celebrity.