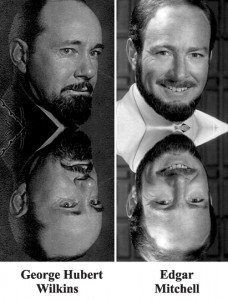 As I was traveling by train from Liverpool to London, I was reading Dr. Larry Dossey’s book entitled The Power of Premonitions. There is a chapter entitled Across Space and Time: Two Explorers Test the Limits of Premonitions. In this chapter he describes how the Australian native Sir George Hubert Wilkins was a real-life superhero who was the first person to fly an aircraft across the northern polar ice cap in 1928, and who was also a war hero and scientist.

Wilkins grew up with the aborigine people and he noticed that they seemed capable “of knowing of some event which was taking place beyond their range of sight and hearing.” (1) When Wilkins went on a rescue operation to Alaska, he decided to see if he could send telepathic messages to a collaborator in New York named Harold Sherman, who was a psychic and writer.

Over a period of 6 months, Wilkins would write a log of events that transpired in Alaska and attempt to send telepathic messages to Sherman regarding these events. Sherman would receive impressions, theoretically from Wilkins, and write them down. When an independent evaluator correlated Wilkin’s written log to Sherman’s written impressions, a 60% correspondence was found, where many very specific items matched.

Dr. Dossey then explains that Edgar Mitchell, who is a retired Navy aircraft carrier fighter pilot and US astronaut, replicated the telepathy experiments of the Wilkins and Sherman.

When Edgar Mitchell served as the lunar module pilot for Apollo 14, he did an experiment in which he tried to send telepathic messages involving number sequences from outer space to human receivers on Earth. The experiment was successful.

In his book, Dr. Dossey made the comment that the experiment done by Wilkins from the Arctic to New York, spanning 3400 miles, was replicated by Edgar Mitchell, who sent telepathic messages across 200,000 miles from outer space.

It is evident from reincarnation research that individuals replicate talents, patterns and behaviors from lifetime to lifetime. As such, it is natural to hypothesize that Edgar Mitchell is the reincarnation of Sir George Hubert Wilkins. Reincarnation research also demonstrates that individuals have similar facial features from lifetime to lifetime. As I was traveling on the Virgin train from Liverpool to London, I used the Internet to see if Edgar Mitchell resembles Wilkins. I found that a similarity in appearance does indeed exist.

Innate Talent: Wilkins was a pioneering pilot, war hero, scientist and experimenter in telepathy. Edgar Mitchell is a retired Navy pilot, Apollo astronaut, doctoral graduate from the Massachusetts Institute of Technology (MIT) in Aeronautics and Astronautics, telepathy experimenter and founder of the Institute of Noetic Sciences (IONS), which is dedicated to better understanding subjects such as consciousness, telepathy and psychokinesis.

Change of Nationality: Wilkins was born in Australia, while Mitchell was born in the United States. Understanding that people can change nationality, religion and ethnic affiliation from one lifetime to another can help create more peaceful world, as most wars are based on differences in these cultural markers of identity.

Split Incarnation: Wilkins died in 1958, while Edgar Mitchell was born in 1930. As such, the lifetimes of Wilkins and Mitchell have overlapped by 28 years, which is similar to the overlap demonstrated in the split incarnation case involving Penney Pierce.