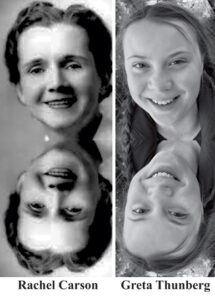 Greta Thunberg was born in 2003 in Sweden and she has become a celebrity teen international advocate for the cause of combating climate change.

Given her passion for environmental causes at such a young age, it is natural to wonder who she may have been in past lifetime.

In a session with Kevin Ryerson, a trance medium who I have worked with since 2001, I asked who Greta was in the past. Kevin channels a spirit being named Ahtun Re who has demonstrated the ability to make past life matches with a high degree of accuracy.

Ahtun Re told me, without any hesitation, that Greta in a past lifetime was Rachel Carson, the author of Silent Spring.

Greta Thunberg as the Reincarnation of Rachel Carson

Rachel Carson was a biologist whose book Silent Spring, published in 1962, documented the adverse effects of chemicals released to the environment. In particular, she described how spraying the pesticide DDT to control mosquitoes resulted in birds ingesting DDT. These birds then laid thin-shelled eggs that would break before chicks were mature enough to survive.

As the chicks had died, the season after winter was silent, as there were no birds to sing to announce spring. Silent Spring is credited with starting the environmental movement of today,

Physical Resemblance in Reincarnation Cases: There is a similarity in the facial features of Rachel Carson and Greta Thunberg. It will be interesting to observe how Greta’s appearance evolves over time.

To review a reincarnation case in which past life physical resemblance has been assessed over a span of 20 years, please go to:

Change of Nationality: Rachel Carson was born in the United States in Pennsylvania, while Greta Thunberg was born in Sweden.

Understanding that a soul can be born into a different religion, nationality or ethnic affiliation from one lifetime to another can help create a more peaceful world, as most wars and conflicts are based on differences in these cultural markers of identity,