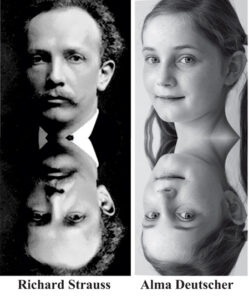 Richard Strauss was born in 1864, in Germany. He was a musician, conductor and composer. He was especially successful in creating operas and it has been determined that his operas are the second most performed of any composer in modern times. Strauss died in 1949.

Alma Deutscher was born in 2005, in England. She is child prodigy musician and at age 10, she wrote her first full length opera. Music experts have noted that her ability to compose opera and orchestral works at such a young age is remarkable, as this requires knowledge of what sounds and range various instruments can achieve. Normally, this ability would take a lifetime in music to learn.

I watched a 60 Minutes television program in the United States in which Alma’s talents were described. While watching the program, I had the intuition that Alma is the reincarnation of Richard Strauss, though I myself knew little about Strauss.

In a session with Kevin Ryerson, a trance medium who channels a spirit guide named Ahtun Re, who has demonstrated the ability to make past life matches with a high degree of accuracy, Ahtun Re affirmed that Alma Deutscher is the reincarnation of Richard Strauss.

Physical Resemblance in Reincarnation Cases: There is a slight similarity of facial features between Richard Strauss and Alba Deutscher, though this resemblance will need to be reassessed as Alba matures.

A case in which physical appearance has been documented from childhood to adulthood, that verified similarity in facial features from one lifetime to another, is the:

Child Prodigies, Past Life Talent, Behavior and Abilities: The musical genius of Richard Strauss shines forth in the life of Alba Deutscher.

Change of Nationality: Richard Strauss was born in Germany, while Alba Deutscher was born in England. Understanding that a soul can be born into different countries and ethnic heritages can help make the world a more peaceful place, as most wars are based on differences in these cultural markers of identity.