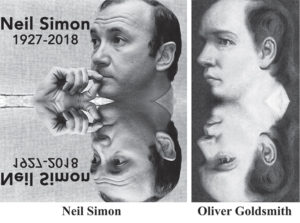 Neil Simon is one the most successful playwrights in contemporary times. His works, which have been made into many movies, focus on relationships of everyday people. He is known for his tolerant and understanding view of human behavior.

In a session with Kevin Ryerson, Ahtun Re affirmed that Neil was Oliver Goldsmith in a prior incarnation. Goldsmith wrote The Vicar of Wakefield, which was one of the most popular novels of the 18th-century. Goldsmith, in his written works, is known for his portrayal of the innate goodness of human beings, which seems to reflect Neil Simon’s sympathetic approach to his characters.

Physical Resemblance: Oliver Goldsmith and Neil Simon share physical features, including a very round head. Click on the image to enlarge it.

Past Life Talent: The writing talent of Goldsmith has shined forth in the career of Neil Simon.

Change in Nationality and Religion: Oliver Goldsmith was born in Ireland, where his grandfather was a Christian clergyman. In contrast, Neil Simon was born in the Bronx, New York to a Jewish family.