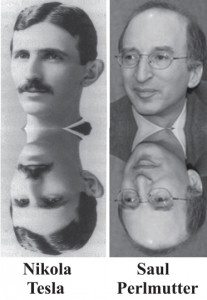 Having posted the Thomas Edison | Elon Musk reincarnation case, I thought it would be of interest to post reincarnation cases involving Nikola Tesla, who worked with Edison and later became a competitor in the controversy of whether DC or AC current should be used to transmit electrical power. In a session with Kevin Ryerson, I asked whether there was a well-known contemporary incarnation of Tesla.

Ahtun Re revealed that the most prominent incarnation of Tesla is that of Saul Perlmutter, an astrophysicist who won the 2011 Nobel Prize for providing evidence that the expansion of the universe is accelerating. Ahtun Re explained that in the incarnation as Perlmutter, the soul of Tesla wanted to work in collaboration with other scientists, rather than to work in isolation, as Tesla did.

Ahtun Re stated that in the Perlmutter incarnation, the soul of Tesla also wanted to experience family life. A tragic part of Tesla’s story is that he lived alone and died by himself in a room of the New Yorker Hotel, which he served as his residence.

Regarding physical appearance, Tesla was very thin towards the end of his life and was almost emaciated. In contrast, Perlmutter has a chubbier face which is more consistent with Tesla as a young man. In sum, with the Perlmutter incarnation the soul of Tesla has been able to enjoy collaboration with other scientists, as well as enjoy a more normal social life and diet.

Physical Resemblance in Reincarnation Cases: The bone structure of the young Tesla and Saul Perlmutter are roughly consistent. Differences can be attributed to Perlmutter having a more normal weight, as well as different ethnic and genetic factors.

Past Life Talent: Tesla’s gifts for science and technology are observed in the life of Perlmutter.

Relationships Renewed through Reincarnation: Edison and Tesla were close associates, with Tesla working in Edison’s lab before Tesla struck out on his own. With Elon Musk’s SpaceX venture, Elon and Saul likely know of one another, though I don’t know if they have ever met.

Change in Religion, Nationality and Ethnic Affiliation: Tesla was born to Serbian parents in a village that now lies in Croatia. His father was a priest in the Serbian Orthodox Church, a Christian religion. In contrast, Saul Perlmuller was born into an Ashkenazi Jewish family in Pennsylvania.