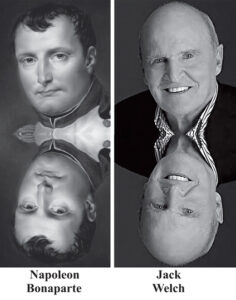 From: Origin of the Soul and the Purpose of Reincarnation

I proposed the reincarnation match between Napoleon and Jack Welch in 2004, which was confirmed by the spirit being Ahtun Re, who is channelled through trance medium Kevin Ryerson. I have worked with Kevin and Ahtun Re since 2001 and Ahtun Re has demonstrated the ability to make past life identificartions with a high degree of accuracy. This cases is included in my book Origin of the Soul and the Purpose of Reincarnation.

A supporter of ReincarnatoinResearch.com, Judith Shipstad, expressed particular interest in the Napoleon | Welch case, which upon further investigation stems from a past lifetime that she had with Napoleon, in which he served as an administrator for him. Judith, upon my request, wrote a brief analysis comparing Napoleon and Jack Welch. This narrative is provided below:

“Yes, any number of things correspond between Jack Welch and Napoleon. Napoleon was a military and administrative genius who was trained as an artilleryman and came to power in a bloodless coup. Consider the quotes below:

‘Having been in the field, I had a strong prejudice against most of the headquarters staff.’

‘In those days, I was throwing hand grenades…’

‘We were playing as if our lives depended on it, diving into hedges and sweating bullets.’

‘It sent a clear message…Sergeants weren’t going to be shot while generals and colonels could continue on as if nothing happened.’

Remarkably, the above quotes are not Napoleon’s, but are lifted directly from Jack Welch’s biography. Notable for their military-oriented metaphors, these remarks were made in regard to Welch’s work at General Electric.

Both men demonstrated organizational ability, intelligence, energy, attention to detail, confidence, competitiveness and an ability to inspire others. As youngsters, both evinced a distaste for ‘being on the losing side.’

Napoleon aspired to wrest India from the British and reap for France the benefits of its acquisition. The expedition to Egypt was commenced with this same purpose in mind, but that goal was never realized. Welch, however, proudly relates that under his leadership, GE developed extensive business relations with India and found India to be a rich source of talent. I especially note the photo of Welch in India, thoughtfully clutching to his breast a journal titled India, as a prominent Indian colleague holds him in conversation. That picture is worth a million bucks–Napoleon indeed has finally conquered India!

Notable also is the photo of Welch from his autobiography which shows him in India meeting the Queen of England. Britain was the constant foe of France during Napoleon’s life. In this interesting turn of events, the former foe of England, Napoleon, in his contemporary incarnation as Welch, was presented to the Queen. He is shown in profile, and though few readers will be aware of it, they are seeing the virtual profile of Bonaparte.

Both men had mothers of strong character whom they fondly respected; both had three primary women in their lives. Napoleon had two marriages and a significant mistress, while Welch has had three wives.

Both men were slightly short of stature and had rather thin legs. Their hair lines were similar. Napoleon played a card game called whist; as a youngster, Welch played canasta with his mother.

Napoleon’s speaking voice was described as not deep, but well-modulated. Welch’s voice is not deep, and as for well-modulated I’m not sure–YouTube videos reveal that in his advanced age, his voice is a little hoarse, as though he has smoked too much. If Welch was a smoker, that would correspond with Napoleon’s well-known snuff habit.

As I look at the pictures of Welch with his chairmen of the board and golf buddies, I can’t help but feel I am looking at a karmic group. Those guys were probably the Marshals of France and First Empire generals.”

To review other military and business cases, please go to:

Physical Resemblance from One Lifetime to Another: There is a similarity in the facial architecture of Napoleon and Jack Welch.

Past Life Talent: As Judith’s analysis describes, both Napoleon and Welch were born leaders. In Origin of the Soul, it is discussed that military leaders, as they progress spiritually, lean away from careers that involve violence and shift to leadership roles in business or politics.

Change of Nationality from One Incarnation to Another: Napoleon was French, while Welch was born in the United States. Understanding that we can change religion, nationality and ethnic affiliation from one lifetime to another can help create as more peaceful world, as most conflicts and wars are bases on differences in these cultural markers of identity.