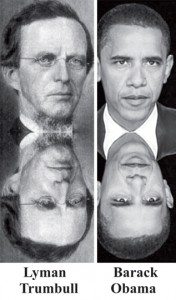 When Barack Obama rose upon the US national political stage with his 2008 run for the Presidency, many people wrote to me with the speculation that he is the reincarnation of Abraham Lincoln. Though I did not think that it was a valid match, I asked Ahtun Re in a session with Kevin Ryerson whether it is possible that Obama is the reincarnation of Lincoln. Ahtun Re said, “No, but he was close to Lincoln.”

Ahtun Re explained that Obama was a fellow Senator from Illinois who served with Lincoln, who was involved with writing the constitutional amendment which ended slavery. Ahtun Re later confirmed that Obama was Lyman Trumbull, an abolitionist who as chairman of the Judiciary Committee, co-wrote the 13th amendment which did end slavery in the United States.

A related case, given the 2012 presidential race, is the reincarnation case of Almon Babbit | Mitt Romney.

The Reincarnation of Abraham Lincoln and Family

Contemporary incarnations of Abraham Lincoln and his family members are found in my book, Born Again

Physical Resemblance in Reincarnation Case: The facial features of Lyman Trumbull and Barack Obama are consistent.

Past Life Talent: Lyman Trumbull served on the US Senate Judiciary Committee and Barack Obama has been a professor of law and editor of the Harvard Law Review.

Change in Race: Lyman Trumbull was Caucasian, while Barack Obama is African American, having an African father and a Caucasian, American mother.