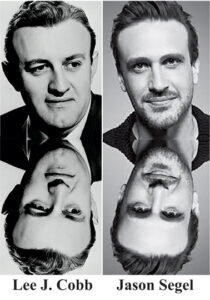 Lee J. Cobb was an American actor who was known for dramatic and serious roles in movies. He was born in New York City to a Jewish family of Russian and Romanian ethnic heritage. Cobb died in 1976.

Jason Segel was born in 1980 to a Jewish father and Christian mother. He is an American actor who is best known for comedic roles, in movies and on television, such as on  the popular television series, How I Met Your Mother.

A supporter of ReincarnationResearch.com wrote to me suggesting that Jason Segel is the reincarnation of Lee J. Cobb based on the remarkable resemblance in facial features, as well as their common career paths as actors.

In a session with Kevin Ryerson, who channels a spirit being named Ahtun Re who has demonstrated the ability to make past life matches with a high degree of accuracy, Ahtun Re affirmed that Jason Segel is the reincarnation of Lee J. Cobb.

Physical Resemblance in Reincarnation Cases: There is remarkable similarity in the facial features of Lee J. Cobb and Jason Segel.

Past Life Talent, Behavior and Abilities: Cobb and Segel are luminaries of Hollywood movies and television.