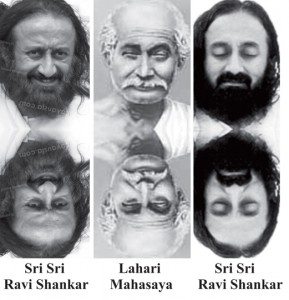 Revealed by: Ahtun Re in a Ryerson-Semkiw Reincarnation Research Session

Ahtun Re, the spirit being channeled through Kevin Ryerson who has demonstrated an ability to make accurate past life matches, has revealed that spiritual leader Sri Sri Ravi Shankar is the reincarnation of guru Lahiri Mahasaya.

“My vision is a Stress-Free, Violence-Free World.”

Similarly, a goal of ReincarnationResearch.com is to help create a more peaceful world though promoting evidence of reincarnation, which shows that from lifetime to lifetime, individuals can change religion, nationality and ethnic affiliation. Most conflicts and wars, such as we have been witnessing in the Middle East, are based on these cultural markers of identity. Once people realize that these markers are temporary and can change from one incarnation to another, violence based on these divisions will be mitigated.

Physical Resemblance in Reincarnation Cases: There is a similarity in facial features between Lahiri Mahasaya and Ravi Shankar. Both have maintained very similar mustaches. Reincarnation cases that demonstrate that men can have the same facial hair from lifetime to lifetime include:

Past Life Talent: Both Mahasaya and Shankar are spiritual gurus and leaders who have promoted the benefits of meditation.