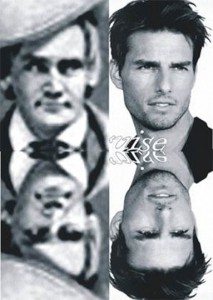 The Tom Cruise case was derived in the process of investigating the case of Amitabh Bachchan for my book, Born Again. I was told that Mr. Bachchan is one of the most famous and esteemed of Indian movie stars.

In a session with Kevin Ryerson, I was surprised when Ahtun Re told me that in a past lifetime, Bachchan was Edwin Booth, a prominent American 19th century stage actor who was the brother of John Wilkes Booth, the individual who assassinated Abraham Lincoln. I found that the facial match between Edwin Booth and Amitabh Bachchan was striking and eventually, I discovered that Edwin Booth’s entire family had reincarnated around Bachchan.

In relation to this set of cases, Ahtun Re told me that Nicole Kidman, in a past lifetime, had been on stage when Lincoln was fatally shot. It turned out that in that incarnation, Nicole was associated with the actor Joseph Jefferson, who Ahtun Re later confirmed has reincarnated as Tom Cruise.

It turns out that the family of Joseph Jefferson | Tom Cruise had built a theater in Springfield, Illinois, but religious groups convinced the city council not to allow the theater to open, as they perceived it to be “devil’s workshop.” It was none other than the theater-loving attorney, Abraham Lincoln, who came to the family’s rescue and saw to it that the theater was able to function.

Of interest, Tom Cruise likely believes in reincarnation, as he is a student of Scientology, which accepts reincarnation as the way a soul evolves. Joseph Jefferson wrote an autobiography. It would be of value to know if Mr. Cruise sees parallels between Joseph Jefferson’s life and his own.

Physical Resemblance from One Lifetime to Another: A physical resemblance between Joseph Jefferson and Tom Cruise is apparent.

Innate Past Life Talent: The acting experience and talent of Joseph Jefferson shines forth in Tom Cruise, who earned success in movies while still a teenager.

Change of Religion, Nationality or Ethnic Affiliation from One Incarnation to Another: Joseph Jefferson was born into a Christian family, while Tom Cruise has been an advocate of Scientology.

Renewal of Relationships through Reincarnation: Laura Keene | Nicole Kidman, Joseph Jefferson | Tom Cruise and Mimi Rogers were associated in the Civil War theater culture and have been reunited in contemporary times in Hollywood. Keene and Jefferson acted together and were affiliated as business partners, while Kidman and Cruise have made movies together and were marriage partners. Cruise was also married to Mimi Rogers.