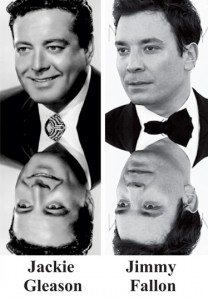 Revealed by: Spirit Being or Spirit Guide Ahtun Re in a Ryerson-Semkiw Reincarnation Research Session

Jimmy Fallon as the Reincarnation of Jackie Gleason

When Jimmy Fallon succeeded Jay Leno as host of The Tonight Show in 2014, the show’s introductory images were redesigned.  I was struck that Jimmy used black and white footage of New York City, followed by “The Tonight Show starring Jimmy Fallon” placed on a large full moon. I am a great fan of Jackie Gleason and knew that Jimmy was borrowing the moon graphic from Gleason’s classic Honeymooners TV series. On his set, he has a miniature wooden model of New York City skyline and a color graphic of the New York City skyline in the background.

As I watched Jimmy go through his monologue, I realized that Jimmy resembles a young and lean Gleason. Of interest, both comedians have used nicknames, John Herbert “Jackie” Gleason and James Thomas “Jimmy” Fallon. Place your cursor on images to enlarge.

In a session with Kevin Ryerson, Ahtun Re, the spirit guide or spirit being who has demonstrated the ability to make accurate past life matches, affirmed that Jimmy Fallon is the reincarnation of the “Great One,” Jackie Gleason. Of interest, Gleason was a passionate reader of literature regarding the paranormal.  It will be interesting to see if Jimmy Fallon is open to the concept of reincarnation.

Jimmy did once make a joke regarding John Kerry, stating that Kerry looks like someone already on our money.  Jimmy was referring to the resemblance between John Kerry and Andrew Jackson. Coincidentally, this is a reincarnation case that was first proposed by Kevin Ryerson.  To learn more, go to the: Andrew Jackson | John Kerry Reincarnation Case

Of note, the black and white New York City montage and Honeymooners moon logo at the beginning of Jimmy’s show can be seen as reflecting the life and era of Jackie Gleason, while the color images of the city which follow and the color backdrop of the city on the set can be seen as representing Gleason’s contemporary life as Jimmy Fallon.

Physical Resemblance in Reincarnation Cases: There is a strong resemblance between the young Jackie Gleason and Jimmy Fallon.

Split Incarnation or Parallel Lives: Jackie Gleason died on June 24, 1987, while Jimmy Fallon was born on September 19, 1974, an overlap of about seven years.  As such, this represents a case of split incarnation, where a soul can animate more than one physical body at a time.