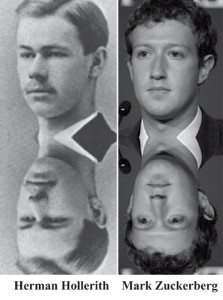 Revealed by: Spirit Guide or Spirit Being Ahtun Re in a Ryerson-Semkiw Reincarnation Research Session, 2012

In a session with Kevin Ryerson, I asked Ahtun Re for a past lifetime for Mark Zuckerberg, the founder of Facebook. Ahtun Re told me that Mark was the inventor of a punch card machine that was used at the turn of the century by the United States Census Office to help keep track of the large number of immigrants that were entering the United States.

With a little research, I found that Herman Hollerith created this machine and in a subsequent session with Kevin, Ahtun Re confirmed that Hollerith reincarnated as Zuckerberg and he noted that Facebook is also an invention that helps organize a large population of participants.

As souls reincarnate in groups, I wondered if Flint had reincarnated around Mark Zuckerberg. I noticed that Flint bears a resemblance to Sean Parker, who cofounded Napster and became Facebook’s founding president. In reincarnation cases, it is frequently observed that men maintain the same facial hair from one incarnation to another. I observed that Charles Flint’s beard is reflected in Sean’s whiskers. In a subsequent session with Kevin Ryerson, Ahtun Re confirmed that Sean Parker had been Charles Flint in a prior incarnation. 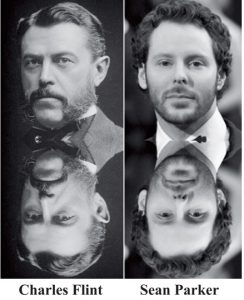 A movie was made about the story of Facebook’s founding, which was entitled The Social Network. Music for the movie was written by Trent Reznor of Nine Inch Nails. Please review:

Physical Resemblance from One Lifetime to Another: In comparing images of Herman Hollerith and Mark Zuckerberg, there is a similarity in the shape of the face, though Mark’s eyes are larger than Herman’s. I believe appearance is based on the soul’s energy template, as well as genetic or hereditary factors. Genetic factors may account for the difference in appearance of the eyes. It is also possible that a similarity in appearance may be more evident if an image of Mark in a better corresponding pose is used. There is a resemblance between Charles Flint and Sean Parker, including, as mentioned, similar facial hair.

Past Life Talent: Hollerith and Zuckerberg share a talent for invention involving information technology, though Hollerith’s work was in hardware, whereas Zuckerberg has focused on software. It should be kept in mind, though, that Hollerith did not have the option to work with software as it didn’t exist in his time. Charles Flint and Sean Parker both have demonstrated talent as businessmen and entrepreneurs.

Renewal of Relationships through Reincarnation: Hollerith and Flint have been reunited through reincarnation in the personas of Mark Zuckerberg and Sean Parker.