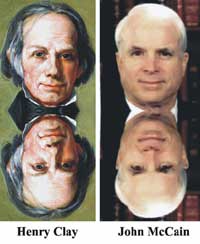 Affimed by: Spirit Guide or Spirit Beign Ahtun Re in a Ryerson-Semkiw Reincarnation Research Session

When I looked at a portrait of Henry Clay, I immediately saw John McCain in the eyes of Henry Clay. In a subsequent session with Kevin Ryerson, Ahtun Re, the spirit guide channeled by Kevin who has demonstrated an ability to make accurate past life matches, agreed with this match. Similarities are noted between Clay and McCain.

Henry Clay
A Senate committee, headed by John F. Kennedy in 1957, was assigned the task of assessing and honoring its past members. This committee declared that Henry Clay was the greatest Senator in the history of this body.

John McCain
John McCain is one of the most respected of Senators in the United States and he has been given many awards for his service, including the Paul H. Douglas Ethics in Government Award. He was named one of the “25 Most Influential People in America” by Time magazine in 1997.

Henry Clay ran for the US Presidency three times and despite being one of the most popular and known political figures of the era, lost each race.

John McCain
John McCain has sought the Republican Presidential nomination over the years, but has been unsuccessful in his bids.

Reputation for Love of Country

Henry Clay and John McCain share the trait of expressing great love for the Union, for the United States.

Both Henry Clay and John McCain have demonstrated a Hawkish attitude towards national defense and military affairs.

Of interest, Andrew Jackson, who has been identified as being reincarnated in the persona of John Kerry, and Henry Clay were bitter political rivals. It was Henry Clay who helped John Quincy Adams defeat Andrew Jackson in the election of 1824.

In contemporary times, John McCain and John Kerry have been brought together through their mutual service in Vietnam and their dedication to Prisoners of War and those Missing in Action. They have been great friends.

Physical Resemblance in Reincarnation Cases: There is a similarity in facial features of Henry Clay and John McCain.

Innate Past Life Talent: John McCain has become a very influential US Senator, as was Henry Clay.

Relationships Renewed through Reincarnation: Henry Clay and Andrew Jackson were political contemporaries, as John McCain and John Kerry are now.