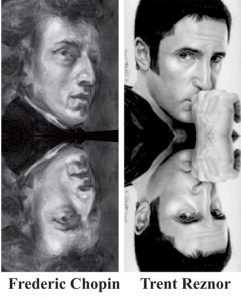 Affirmed by: Spirit Guide Ahtun Re

My father was a physician, but he played piano and he loved Frederic Chopin.  When I was a child, I would go to bed in my second story room, with Chopin’s cords echoing up the stairwell.

When I first heard the industrial rock of Nine Inch Nails (NIN), I was struck how in certain songs, despite the grinding, mechanical rhythms, there was a beautiful melancholy melodic quality that reminded me of Chopin. I also noticed that the keyboards in NIN songs, played by Reznor, reminded me of Chopin’s piano, with melodic, sad refrains.  I noted that Trent Reznor, the leader and primary songwriter of Nine Inch Nails, bore a resemblance to Chopin.

In a session with Kevin Ryerson, I asked Ahtun Re whether Frederic Chopin had reincarnated as Trent Reznor.  Ahtun Re said Reznor was indeed the reincarnation of Chopin.

One song that Reznor wrote and performs in is entitled Hurt, which for me epitomizes expression of Chopin in Reznor’s music.  Listen to Trent’s piano solo, which lasts for most of the video, and see if you hear Chopin’s soul in the notes.  Also, Johnny Cash did a version of Hurt that can bring one to tears.

Trent Reznor has also written the soundtrack to the movie The Social Network, along with Atticus Ross. The pair won an Academy Award for this effort.  For those who see this film, listen to the music of the opening scenes. Though I don’t know whether Reznor and Ross wrote this piece together or whether one of them created the melody, in this music, I hear the hand and soul of Frederick Chopin.  Listen to the piano version of The Social Network Main Theme.

Physical Resemblance from One Lifetime to Another: The facial architecture of Frederic Chopin is consistent with that of Trent Reznor.

Past Life Innate Talent: The musical talent of Chopin is expressed in the musical gifts of Reznor.

Change of Religion, Nationality or Ethnic Affiliation from One Incarnation to Another:  Chopin was born in Poland, while Trent Reznor is a native of the United States.