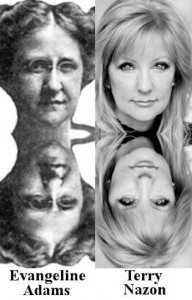 Terry Nazon is a very successful astrologer in Los Angeles and Florida who has many celebrity clients. She found the ReiincarnationResearch.com website and wrote to me on November 16, 2010. Terry related that her interest in astrology started in childhood. It was natural to hypothesize that Terry’s early interest in the field stemmed from a past lifetime.

In a session with Kevin Ryerson, Ahtun Re told me that Terry was a prominent astrologer in the 19th century whose clients included business barons. I then did some research and found that there was an astrologer named Evangeline Adams who worked with J. P. Morgan, as well as other celebrities of that era. In a subsequent session with Kevin, Ahtun Re confirmed that Terry was Adams in a past incarnation.

When I wrote back to Terry, I shared this information with her and noted that Evangeline Adams had written an autobiography. I suggested that Terry read this book to see if she related to Adams.

Terry replied with this response: “Oh my God! It was a book I read by her when I was 12 that got me started…her voice was my voice.”

Physical Resemblance from One Lifetime to Another: The facial architecture of Evangeline Adams and Terry Nazon are similar.

Past Life Talent: Terry got started in astrology at the age of twelve and has become one of the most successful astrologers in the world.

Affinity Case: Terry relates that a book written by Evangeline Adams got her started in astrology at the age of age 12 and that Adams’ voice was her own voice. As such, Terry seems to have been attracted to the work of her own past life persona.

Note that in the Reincarnation Case of John B. Gordon | Jeff Keene, an academic linguistic analysis demonstrated that Jeff’s writing style is the same as Gordon’s and my impression, on reading documents written by Gordon and Keene, was that they were written in the “same voice, which echoes the statement made by Terry.