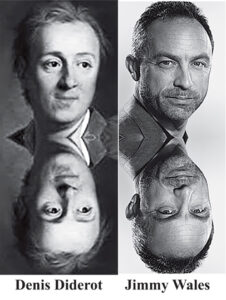 Denis Diderot is best known for serving as the co-founder, primary contributor and chief editor of the first French encyclopedia, known as the Encyclopédie, which was established in 1751.

The Encyclopédie was controversial as it was secular and in articles, the veracity of Bible miracles were questioned. As a result, some of the writers of articles were persecuted and even jailed. The Encyclopédie was banned by the Catholic Church in 1758 and by the French government in 1759.

Diderot became despondent about the project and he suffered financial hardships. In 1766, after the Empress of Russia, Catherine II, heard about Diderot’s woes, she paid him to be her librarian, which he did until the end of his life. Diderot died in 1784.

Jimmy Wales was born on August 7, 1966 in Huntsville, Alabama in the United States. On January 15, 2001, with Larry Sanger and others, Wales launched Wikipedia—a free, open content encyclopedia. In doing so, Wales mirrored Diderot’s establishment of Encyclopédie.

Wikipedia has become the world’s largest encyclopedia. As a result, Time magazine, in 2006, named Wales as one of the “Top 100 Most Influential People in the World.”

I often use Wikipedia in my articles and I recently made a monetary donation. Jimmy Wales often sends Wikipedia fundraising messages and in an email he sent in September 2019, he related that Wikipedia is made up of librarians, which echoes his role as the librarian of Empress Catherine II of Russia, over 200 years ago.

Physical Resemblance in Reincarnation Cases: There is a resemblance of facial features between Denis Diderot and Jimmy Wales

Change of Nationality: Denis Diderot was born in France, while Wales was born in the United States. Understanding that religion, nationality and ethnic affiliation can change from one lifetime to another through reincarnation can help make the world a more peaceful place, as most conflict and wars are based on differences in these cultural markers of identity.