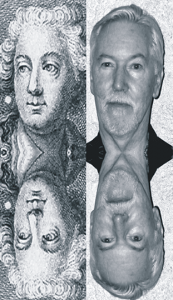 How Derived: Revealed by Ahtun Re in a Ryerson-Semkiw Reincarnation Research Session

Spirit Being Ahtun Re spells “Ledoux”

This reincarnation case is unique, as it was solved through the combined efforts of two spirit beings, Ahtun Re and Maitreya. Maitreya is a discarnate spirit that Wayne Peterson has had a telepathic relationship with for decades. He describes his encounters with Maitreya in his book, Extrordinary Times, Extraordinary Being.

Since Wayne had become a good friend of mine, I assumed that I most likely knew him in a past lifetime. Wayne is a natural artist, though he never took a lesson in  his life. Pictured to the below is Wayne’s sitting room. Click on images to enlarge. He literally converted his modest home in Las Vegas into a palace through his art. Wayne even painted a mural on his garage wall. This mural is provided below Wayne’s sitting room, which features a landscape underneath an arched door.

In a session with Kevin Ryerson, I asked whether Wayne had been incarnate during the American Revolution, as I had a significant past life during that era. Ahtun Re, the spirit guide that I have been working with through Kevin Ryerson, who has demonstrated an ability to make past life matches with a high degree of accuracy, told me that Wayne was incarnate during that era, but that he was in France and was affiliated with the French Court. Upon questioning, Ahtun Re told me that Wayne’s name in that lifetime was “Ledoux.” Ahtun Re even spelled the name for me. 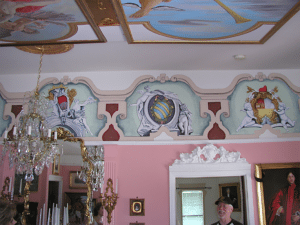 Spirit Being Maitreya gives Wayne a Visual Clue regarding Ledoux

With that information, I tried to find this Ledoux historically, but was unsuccessful. I passed this information onto Wayne and left the issue alone. Wayne contacted me six months to a year later with new information. Fortunately, the spirit being Maitreya came to our assistance regarding Ledoux, who gave Wayne clues telepathically. Amusingly, Wayne tends to get these telepathic messages while he performs his morning shaves. One routine day, while Wayne was tending to his whiskers, he received the telepathic message:

“If you want to find Ledoux, look in this magazine.”

In his mind, Wayne then saw a clear image of the cover of a specific issue of Architectural Digest, complete with volume and number. Wayne later ordered this back issue and when he received it, he read it cover to cover, but found nothing on a Ledoux. Time passed and again while shaving, Wayne received another telepathic message:

“If you want to find Ledoux, look in this chapter.”

Wayne then visually saw a specific article in the Architectural Digest issue he now possessed, which consisted of only a few pages. Wayne read and reread the article multiple times, but no Ledoux. 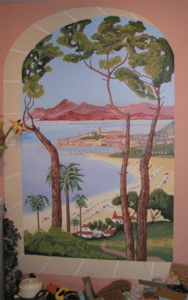 When he told a friend of his frustration in not being able to find Ledoux, she replied, “Perhaps you need to look closer. I gave you a magnifying glass as a gift, why don’t you use it?” Wayne initially thought this was a silly idea, but he followed her suggestion. He focused on a photo of a man, the subject of the article, who was seated in front of a bookcase. To his great excitement, in studying the volumes in the bookcase under magnification, he clearly saw a black book with gold lettering which had the title Ledoux.

Wayne went on the Internet and found that this book was available and he ordered it. When he received it, Wayne found that he completely related to this artist and architect, Claude Nicolas Ledoux, in that his art and architecture were consistent with the paintings that Wayne had been doing for years. Wayne now understood that his talent for architectural painting came from the Ledoux lifetime, though the Venetian scenes that he chose to paint were inspired by his incarnation as Francesco Foscari.

Wayne also noted that that he had replicated specific designs in contemporary times from the Ledoux lifetime. For example, Ledoux had been commissioned by the King of France to design a village. Ledoux created an integrated community, stressing that beauty must be part of the environment for all inhabitants, not only for the aristocrats, but for the peasantry as well. Wayne recalled that as a child he would create the same Utopian village out of mud in his back yard.

Further, Wayne painted a mural on his garage wall which replicated a piece done by Ledoux. Wayne created this mural years before he learned about his Ledoux lifetime. In this mural, pictured above and to the right, Wayne painted an arched stone doorway in the foreground, which was used to frame a landscape. Under the arched stone doorway is a curved eucalyptus tree and in the distance, buildings of a settlement are portrayed. Ledoux had created a similar design 200 years before, utilizing the arch of a stone bridge in the foreground to frame a landscape. Under the arch of the stone bridge, the same curved, eucalyptus tree is found and in the distance, buildings of a city can be seen. A comparison of these two images is provided below. Click on the comparison to enlarge it.

In addition to this example, in the reincarnation cases of Gauguin and Picasso, we also shall see dramatic examples of how artistic development is unconsciously replicated, from one incarnation to another. 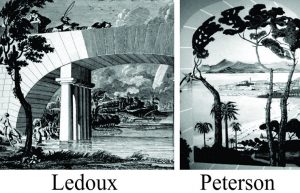 Physical Resemblance: Wayne’s facial features are consistent with those of Claude Ledoux.

Innate Past Life Talent: Ledoux was a professional architect and artist. Wayne spontaneously demonstrated great ability to do architectural paintings, without ever taking an art class. Wayne created a mural in his garage that mirrored a landscape that Ledoux had done with very similar features of composition. Though Wayne’s talent for art seems to stem from the Ledoux lifetime, his favorite themes have been of Venice, demonstrating nostalgia for his lifetime as Francesco Foscari.

Spirit Being Involvement: Ahtun Re, the spirit being that I work with who is channeled through Kevin Ryerson, gave the specific name of “Ledoux,” with that exact spelling, in identifying Wayne’s French past lifetime. Maitreya, the spirit being that Wayne has had a telepathic relationship with for years, then provided the means to locate Ledoux historically by showing Wayne a specific issue of Architectural Digest.