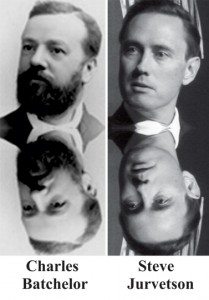 In working on the reincarnation case of Thomas Edison | Elon Musk, I read that Edison had a chief associate, engineer and fellow inventor named Charles Batchelor. In addition to being a gifted inventor himself, Batchelor also became a prominent businessman who became Treasurer and General Manager of the General Electric Company, which was created by Edison and Batchelor. Later in life, he worked in the financial sector, selling securities.

In a session with Kevin Ryerson, Ahtun Re, the spirit being channeled through Kevin who has demonstrated the ability to make accurate past life matches, affirmed that Charles Batchelor has reincarnated and is again working with Thomas Edison | Elon Musk in the persona of Steve Jurvetson. Enlarge the image by clicking on it.

After a successful career as an engineer in the computer industry, Steve Jurvetson became a venture capitalist who has been an integral supporter of Elon Musk’s companies Tesla Motors and SpaceX.

Of interest, it was Charles Batchelor who introduced Edison to NikolaTesla, the protagonist of AC electrical current and the namesake of Elon Musk’s Tesla electric car company. In introducing Telsa to Edison in a letter, Batchelor wrote to Edison: “I know two great men, one is you and the other is this young man.”

Physical Resemblance in Reincarnation Cases: There is a physical resemblance noted in the facial features of Charles Batchelor and Steve Jurvetson. Enlarge the image by clicking on it.

Past Life Talent: Charles Batchelor was a gifted engineer and inventor, who later became a businessman and investor in technology, much like Steve Jurvetson.

Relationships Renewed through Reincarnation: Charles Batchelor was Thomas Edison’s right hand man in the creation of General Electric. These two friends, inventors and industrialists have reunited in the personas of Steve Jurvetson and Elon Musk.