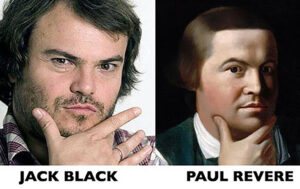 Proposed by: ReincarnationResearch.com supporter based on Internet Look-Alike Site

Paul Revere and the American Revolution

Paul Revere was a figure in the American Revolution best known for his midnight horseback ride warning citizens of Massachusetts that the British were approaching Boston. This British advance led to the first battles of the war, which took place in Lexington and Concord, Massachusetts.

In addition, Revere was an artist. He was a silversmith and he  created a copper engraving depicting the Boston Massacre, an incident that helped spark the American colonies to revolt against the British. 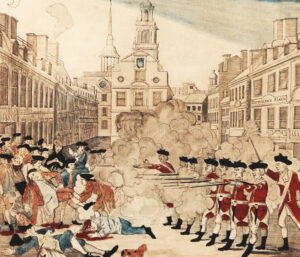 This engraving is featured to the right.

Jack Black is also an artist, one who has focused on acting and music. Indeed, one of my favorite movies, Nacho Libre, stars Black.

Jack Black has an uncanny resemblance with Paul Revere. Image comparisons of the two have been on the Internet for a few years, as evidence of facial similarities in reincarnation cases has grown in awareness and interest.

Still, physical resemblance by itself does not validate a past life and I doubted that Black was Revere.

Nonetheless, in a session with Kevin Ryerson, who channels a spirit being named Ahtun Re, who has demonstrated the ability to make past life matches with a high degree of accuracy, I asked about this proposed case. Ahtun Re affirmed that Jack Black is the reincarnation of Paul Revere.

Physical Resemblance in Reincarnation Cases: There is a striking resemblance between Paul Revere and Jack Black.

Past Life Talent, Behavior and Abilities: Artists tend to continue to create art from one lifetime to another, though the form of art can change. Paul Revere was a silversmith who also did engravings, while Jack Black expresses his creative nature though film and music.

Change in Religion and Ethnic Affiliation: Paul Revere, born in the American colonies before the Revolutionary War, was Christian and of French descent. Jack Black, also born in America or the United States, was raised Jewish.

Understanding that souls can change religion and ethnic affiliation from one lifetime to another can help create a more peaceful world, as most wars and conflicts are based on differences in these cultural markers of identity.