This case provides a dramatic example of geographic memory, in which Peter Avery had innate knowledge of the streets of Isfahan, as well as of the original design of Shalimar Burg, including the location of its original entrance. Though Peter’s specific past life identity could not be found, these past life memories, which were verified, support the validity of this reincarnation case. In addition, it involves a significant change in religion and nationality. Peter Avery appears to have had a past lifetime as a Muslim in Iran. In contemporary times, he was born in England and was presumably a Christian.

Geographic Memory in Reincarnation Cases: A Form of Deja Vu

Geographic memory can be considered a form of déjà vu, where an individual has the feeling that they have been at physical location before, though the individual in fact has never been to that location in their contemporary lifetime.

Some instances of déjà vu may be due to a past lifetime in which time was spent in the geographic area that stimulated the feelings of déjà vu. Ian Stevenson has pointed out that déjà vu is very common and some surveys show that over 60 percent of people have experienced déjà vu. (1)

The subject of this case, Peter Avery, was born in Derby, England, on May 15, 1923. In World War II, he served in the Royal Indian Navy. After the war, he attended the University of London, where he graduated in 1949 with a degree in Arabic and Persian languages.

With these skills, Peter took a job as the Training Manager for Arabic and Persian languages for the Anglo-Iranian Oil Company. He was stationed in the city of Abadan in the southwest region of Iran. For the first six months of his assignment, he was confined to Abadan and the surrounding oil fields.

In the winter of 1949-1950, a manager from the company’s London office, Mr. John Evans, was planning to tour facilities in Iran and he needed an interpreter to travel with him. Peter was assigned to escort Mr. Evans on a trip to Isfahan, in central Iran.

Peter was delighted to be given his assignment, as he would finally get to see more of Iran. As noted, Peter had never been out of the area surrounding Abadan.

Past Life Memories of the Streets of Isfahan 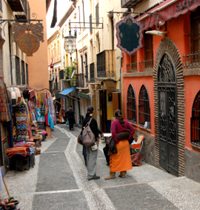 In Isfahan, over breakfast, Peter described to Mr. Evans, in detail, the route that they would take from their hotel to the city’s bazaar and to Maidan-I Shah, a public square that was part of a palace complex built by Shah Abbas I between the years 1590 to 1595.

As they embarked on their walk through the city, Peter’s proposed route was entirely accurate. This is reminiscent of the case of Anne Frank | Barbro Karlen, as Barbro, at ten years of age, was able to lead her parents from their hotel on a 10 minute walk through the winding streets of Amsterdam directly to the Anne Frank House, even though she had never been to Amsterdam before. Similarly, Peter had led Mr. Evans through the streets of Isfahan to the bazaar and Maidan-I Shah.

A Past Life Flood of Emotions at Madrasa Mader-e Shah

The last place that Peter took Mr. Evans that morning was Madrasa Mader-e Shah, a theological complex built by Shah Sultan Hussein in 1706, which Hussein dedicated to his mother. A blue domed mosque sits in the garden of the complex. As soon as Peter and Mr. Evans walked into the courtyard of Madrasa Mader-e Shah, Peter experienced a flood of emotions. Let us let Peter himself narrate the turn of events:

“I burst into uncontrollable sobbing under an overwhelming impression that I had somehow come home. I sat on the parapet of a pond. Mr. Evans very tactfully walked away. He said afterwards that this seemed the best he could do, until I could dry my eyes and rejoin him. Little passed between us about the episode which, in front of one of my employers, embarrassed me, although he showed no sign of disapprobation and seemed quietly understanding. Thus culminated a morning throughout which I had all the time felt a strange familiarity with a city I had never visited before, and the geography of which I had no former conscious knowledge.” (2)

This flood of emotions is similar to what occurred in the case of John B. Gordon | Jeff Keene, when Jeff was intuitively led to a spot called Sunken Road, which is a section of the American Civil War battlefield named Antietam. At Sunken Road, without knowing why, Jeff also started to cry uncontrollably. He felt grief and rage at the same time. Later, he learned that he had almost been killed in the Civil War at that very spot at Sunken Road, in his past lifetime as John B. Gordon.

Past Life Memories: Innate Knowledge of the Original Architecture of Shalimar Bagh 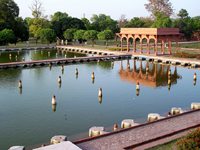 Peter had one other experience which seemed to stem from a past lifetime or lifetimes in Iran and India. It was in 1944, when he was serving in the Royal Indian Navy during World War II. Peter were 21 years of age at the time. An Indian officer on his ship had befriended him and invited Peter to visit his family, who lived in Lahore, which is now part of Pakistan.

The friend knew of Peter’s great interest in Islamic literature and culture and he wanted Peter to meet his father, Khan Bahadur Muhammad Shafi, who was a principle of a school for Asian studies and a scholar of Islamic history.

In Lahore, they visited the Shalimar Bagh, a garden complex which was built by the Islamic Mughal emperors. Peter was accompanied by his friend’s father, the scholar Bahadur Muhammad Shafi. Peter had never been to Shalimar Bagh before, nor had he read about its layout. 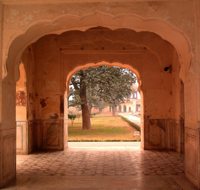 Peter and Mr. Shafi entered Shalimar Bagh through a doorway in a surrounding wall. Peter innately knew that this was not the original entrance. He told Shafi that the original doorway was in the wall opposite them, on the other side of the enclosure. Mr. Shafi told Peter that he was indeed correct.

Later, Peter commented that the pavilion, or small building, in the center of the garden was not part of the original design. Mr. Shafi also confirmed Peter’s statement, noting that the pavilion was originally part of an emperor’s tomb complex and that it was moved to Shalimar Burg by Ranjit Singh, a Sikh who ruled Lahore from 1799 to 1839.

As such, Peter’s proposed past lifetime, in which he became familiar with Shalimar Burg, must have occurred before 1799, prior to the pavilion’s move from the tomb complex to Shalimar Burg.

Peter wrote about his experience at Shalimar Burg: 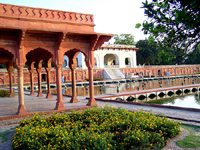 “Although not as shatteringly moved as I was to be in Isfahan, by my sense of déjà vu, in the Shalimar Bagh in Lahore I certainly had a similar feeling of having been there before: of knowing the place intimately; of returning, as it were, home, to somewhere where I had once been ‘at home,’ but this feeling in the Madrasseh in Isfahan was more penetrating then that in Lahore, where it was confined to the garden and did not extend to the whole environment.” (3)

Peter’s experience at Shalimar Burg also is reminiscent of what happened in the Anne Frank | Barbro Karlen reincarnation case. Recall that Barbro she led her parents to the Anne Frank House in Amsterdam at the age of ten, though she had never been to Amsterdam before. On approaching the Frank house, Barbro noted that the entrance had been changed, which was true. She also knew that photographs that Anne Frank had clipped out of magazines of movie stars should have been on a particular wall. These photos had been taken down to be mounted behind protective glass, so they were not present when Barbro and her parents visited the Frank house. A tour guide, though, confirmed that Barbro was correct regarding where the photos normally would be found.

Just as Barbro knew details of the structure and interior of the Anne Frank house from a past incarnation, it appears that Peter knew of the original design of Shalimar Burg, apparently from a past lifetime or lifetimes in Iran and Pakistan. 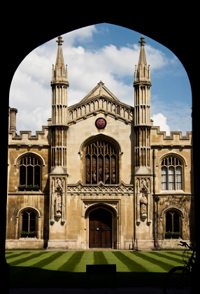 From 1958 to 1990, Peter served as a University lecturer in Persian Studies at Cambridge University. After that, he continued as a Fellow of King’s College, Cambridge, where he became established as a famous scholar of Persian studies. Peter is most well known for his translations of Persian poets Hafiz and Omar Khayyam. In addition, he wrote extensively on the history of Iran, from its earliest origins to contemporary times.

Where did Peter’s passion for Persia and Islamic studies come from, given that he was born in England, which is predominantly a Christian nation?

Peter Avery did not remember any names from his proposed past life experience in Iran and Pakistan and as such, he was not able to identify who he may specifically have been in the past. As such, this case could not be historically validated. Still, his déjà vu experiences and innate knowledge of geographical locations that he had not previously visited in his contemporary incarnation are consistent with past life memories.

This demonstrates the following features:

Past Life Geographic Memory: Peter had detailed knowledge of the streets of Isfahan, Iran and knew of the original design of Shalimar Burg, in Lahore, Pakistan (pictured to the right), though he had never been to these places in his contemporary lifetime. Peter stated that he also did not gain this information through maps or books.

In addition, he experienced a flood of emotions Madrasa Mader-e Shah, which is located in Isfahan, Iran (pictured below and to the right), including the overwhelming feeling that he had come home.

It is likely that these experiences stemmed from a past life or lifetimes in which he had spent time in these geographic locations in Iran and Pakistan. The distance between the cities where he experienced geographic memory, between Isfahan and Lahore, is approximately 1000 miles or 1600 kilometers. Based on when the pavilion was moved to Shalimar Burg, Peter’s past lifetime, when he visited this garden complex, must have been before 1799.

Reincarnation & Change of Nationality and Religion: Though Peter Avery’s religion is not specifically identified in Ian Stevenson’s case report, it is likely that Peter was raised in a Christian family, given his last name and birth in England, a predominantly Christian country.

If Peter did have a past lifetime or lifetimes in Iran and Pakistan, and if his passion for Islamic culture stems from a Muslim past incarnation, then this case demonstrates a significant change in nationality and religion from one lifetime to another.

As we observe events such as the destruction of he World Trade Center in New York and the ongoing conflicts between the Taliban, Al-Qaeda and Judeo-Christian cultures, this case can teach us a valuable lesson.

This reincarnation case demonstrates that we can be Islamic in one lifetime and Christian in another, as well as Iranian or Pakistani in one incarnation and British in a subsequent lifetime. These realizations should make us see ourselves as universal souls that are not limited to one religion or nationality. This realization can help create a more peaceful world.

Note to Readers: Ian Stevenson. MD was a Professor of Psychiatry at the University of Virginia who wrote in a very academic style, as his target audience was fellow scientists. On the Reincarnation Research web site, his past life identity cases are presented as children’s past life-reincarnation stories to make his academic work easier to understand. For those interested in appreciating the scientific rigor of his research, such as his use of multiple witnesses to establish corroborated testimony, please refer to the original reports written by Dr. Ian Stevenson.