How Case Derived: Past Life Memories in Childhood, Spirit Being and Intutive Guidance 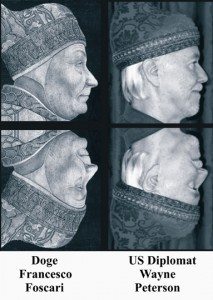 Wayne grew up in the 1940s, in rural Wisconsin, outside of Green Bay. As a child, he began having subtle memories of past lives, so subtle, that he didn’t realize that reincarnation was the basis for these memories. For example, as a small boy, when people asked him what his name was, Wayne would refuse to tell them, since he strongly believed that he had a better name which identified “the real me.” Regarding the situation, Wayne explains:

“This was a battle of wills between my parents and me for years. When they would say, ‘His name is Wayne,’ I would immediately say that it is not. My mother would often challenge me to provide another name, but I could never remember what my name should be, although I knew that I had another name.

It was not until I was twelve years old that I decided that my real name was Francesco Foscari. This was not a name fetched from thin air. For several years the name Foscari floated around in my head as a word. Eventually I put it together with Francesco because it sounded right. I had a deep emotional attachment to the name. As a young teenager, I was determined that when I became an adult, I would officially change my name to Francesco Foscari.

All teens at some point probably think about changing their names to imitate a movie star or to a more romantic sounding name. With me, however, it was a name I had never heard or seen written anywhere. In fact, Italian names did not exist in our community in Wisconsin; so it was odd that I should find an Italian name so magnetic.”

Note how similar young Wayne’s experience was to that of Barbro Karlen, who as a young girl told her parents that her name was not Barbro, but Anne Frank. The difference is that Wayne didn’t realize that his attraction to the name Francesco Foscari was related to a past incarnation, for Wayne didn’t have visual memories of that lifetime. In contrast, Barbro Karlen did have clear memories of being Anne Frank. Also consider that when Wayne stated his name was Francesco Foscari, he did not have an easy way to know who Foscari may have been, as this was decades before Internet search engines became available.

Just as Wayne related that the name Foscari floated around in his mind for years, Peter Teekamp also heard the words “Go-gone” echo in his mind during his childhood. It took Peter years to realize that these words referred to his name, Gauguin, in a past lifetime. 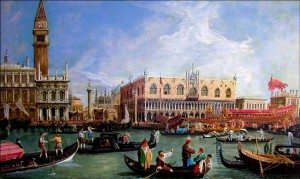 Wayne relates that the years went by and after he joined the US diplomatic service, he traveled to Venice, where he experienced distinct feelings of déjà vu, feelings that he had been there before.

Though he had never took art classes, in adulthood, he found that he could he could paint with great skill. He found he was particularly good at depicting the architecture of classic buildings, though for some reason, he chose to only paint scenes of Venice. When friends asked why all of his artwork involved Venetian scenes, Wayne could not provide an explanation.

The painting featured above and to the right is a representation of Venice done by Wayne in the 1980’s, which was completed before he learned who Francesco Foscari was and before he realized that he had a past lifetime as 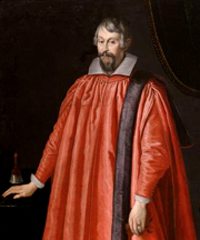 Foscari. The image features the Doge’s Palace, where Foscari lived in for a period of time. In other words, Wayne painted a scene from his own past lifetime as Foscari, though he was not aware of the past life connection when he created this painting. Recall that in the case of Paul Gauguin | Peter Teekamp, Peter unconsciously recreated sketches that were done by Gauguin.

A breakthrough came in 1990, when Wayne, over 40 years after his initial attraction to the Italian name Foscari occurred, received a telepathic communication from the spirit being named Maitreya. Wayne has had experiences with this spirit being since the 1980’s, as described in his book, Extraordinary Times, Extraordinary Beings. Maitreya asked Wayne if he would like to see his past lifetime in Venice. Wayne said that he would.

Wayne then saw scenes in his mind from a past incarnation as if he was watching a movie. Wayne said that he could observe himself moving around in an old house, but he had no ability to use his will to direct his path in the house. It was as if he was on a ride, observing images from this past incarnation.

Wayne relates that he distinctly saw the interior of a house that he had lived in. He realized that he was the man who owned the house and he started experiencing the emotions that the man was feeling. He felt great sadness and somehow, he knew he would die that night. He saw himself wearing a long red brocade robe, which he later learned was the official attire of a Venetian senator.

Wayne then looked out a window of the building and saw that he was on the second floor of a huge house that ran alongside a small, funnel-shaped canal, which emptied into a very large waterway, presumably the Grand Canal of Venice. Wayne then moved down a hallway and looked out a window that had a view of the rear of the property. He saw that a wall separated his house from a small street, which connected to a distinctive white arched bridge that crossed another small canal.

Wayne also heard a woman speaking to him from the lower level of the house. He realized that she was speaking Italian and that he understood her, though in his contemporary lifetime, Wayne doesn’t speak Italian.

Wayne finds his Past Life Home and Past Life Identity 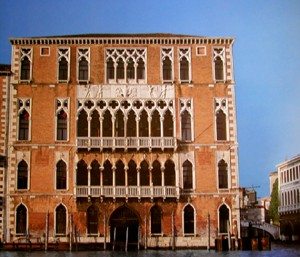 After much searching, Mr. Peterson found the house he had seen in his visit, which was next to a funnel shaped canal, which opened into the Grand Canal, and that featured a white arched bridge in the back. The house was exactly as Wayne had seen it in his past life memory. Wayne was amazed when he found that the house was built by Francesco Foscari, a politician and a Doge of the Venetian Republic, who lived from 1373-1457. Wayne’s pronouncement to his parents, as a child, that his name was no Wayne, but Francesco Foscari, finally made sense.

The image provided above and to the right shows the house that Foscari build. If you enlarge the image by placing your cursor over it, you will see the white arched bridge that Wayne saw in his vision. Use your arrow keys to scroll up and down on the image. 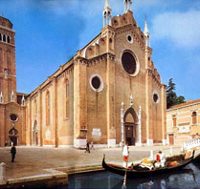 In a subsequent visit to Venice, Wayne tried to find the burial place of Francesco Foscari. Since Foscari was a Doge, a leader of the state, Wayne reasoned that Foscari would be entombed in St. Mark’s Cathedral, where other Doges were buried. Foscari, though, was not there.

Wayne was then intuitively led to the Franciscan Basilica di Santa Maria Gloriosa dei Frari, usually just called the Frari, which is pictured to the right. Wayne walked up to the alter, where a red cord and sign prevented visitors from proceeding further. Despite the barrier, Wayne had the intuition that he would find the tomb of Francesco Foscari behind the alter. Wayne crossed the barrier and went behind the alter, where he indeed found Foscari’s tomb. 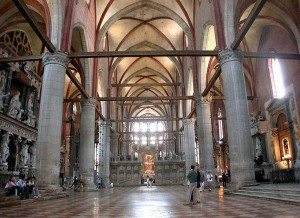 Key features of this case include childhood memories of a name from a past lifetime, Francisco Foscari. Wayne found that he could paint large, architectural paintings, though he never took an art lesson in his lifetime. Wayne noted that his early paintings all involved scenes of Venice.

Several decades later, Wayne experienced vivid images of himself in a large house in Venice, which were telepathically facilitated by the spirit being Maitreya. Wayne then found the house in a book on dwellings along the Grand Canal of Venice. This house, Wayne learned, was built by Francesco Foscari. Wayne later was intuitively led to the tomb of Foscari in Venice. Facial features of Wayne and Foscari are consistent.

An interesting feature of this case is that Wayne has created replicas of the artwork one may expect to find in the home of a Doge of Venice. Further, through his artwork, Wayne has transformed his home in Las Vegas into a Venetian palace. He did so before he had the vision, supplied by Maitreya, which led him to find the house built by Francesco Foscari. 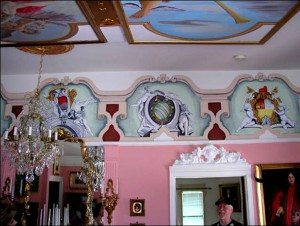 As such, Wayne unconsciously created a home interior reflecting his past life as a Doge of Venice. All the artwork on Wayne’s walls and ceilings, pictured to the right, was done by Wayne himself. This image may be enlarged by clicking on it.

Though he never took an art lesson in his contemporary lifetime, Wayne was drawing upon the talent earned in another incarnation, that of Claude Ledoux, which is featured in Born Again.

Physical Resemblance: Wayne’s facial features are consistent with those of Francesco Foscari.

Innate Past Life Talent: Though Wayne never took an art lesson in his life, he found he could create beautiful paintings. His artwork focused on scenes of Venice, reflecting his past lifetime as Francesco Foscari. Wayne even painted the walls and ceilings of his home to create his own Venetian palace. As noted, Wayne’s talent appears to have been developed in his lifetime as Claude Ledoux.

Spirit Being, Spirit Guide & Soul Guidance: Wayne’s reincarnation case was solved through the intervention of a spirit being, who Wayne identifies as Maitreya, who telepathically provided scenes of Wayne’s past lifetime in Venice. After seeing his past life home in Venice through this intervention by Maitreya, Wayne was able to find this house in a book on homes on the Grand Canal of Venice. The home belonged to Francesco Foscari, which was the name Wayne, as a child, told his parents was his real name.

In addition, Wayne was intuitively led to the tomb of Foscari in the Frari in Venice.