Lin-Manuel Miranda, the Creator of the Musical Hamilton, as the Reincarnation of Aaron Burr, who Killed Alexander Hamilton in a Duel 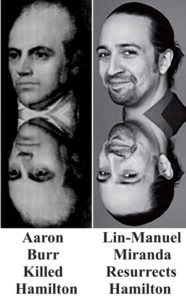 Please note that there is no political motive in this article.

When the musical Hamilton became a sensation in the United States and I learned that it was written by Lin-Manuel Miranda, a composer and lyricist of Puerto Rican descent, I wondered why Miranda was motivated to create a musical celebrating the life of Alexander Hamilton.

I suspected that there was a past life and karmic connection. My immediate intuition was that Miranda was Aaron Burr in a past incarnation, as Burr had killed Hamilton in a duel fought with pistols. It made sense that if Burr ended Hamilton’s life and political career, from a karmic point of view, the soul of Burr would have the desire to resurrect Hamilton in public consciousness.

Though at the time, I did not know the appearance of Miranda, I found that the facial features of Burr and Miranda did match.

In researching Burr, the only reference I could find regarding any interest in theatre or music revealed that Burr financed his daughter, Theodosia, to be trained in music and dance.

In a session with Kevin Ryerson, Ahtun Re, the spirit guide that the Kevin channels, who has demonstrated the ability to make past life matches with a high degree of accuracy, affirmed that Lin-Manuel Miranda is the reincarnation of Aaron Burr.

Of interest, the prime narrator in the the musical Hamilton is Aaron Burr. As such, Miranda, as the reincarnation of Burr, speaks in his own voice regarding his portrayal of the protagonist of his musical, Alexander Hamilton.

Usually, souls show the same abilities and interests from lifetime to lifetime. To review reincarnation cases that demonstrate this principle, please go to:

Past Life Talents and Behaviors

As such, Aaron Burr’s career as a military and political figure is not consistent with Miranda’s career as a theatre figure. People can have secondary traits relative to their primary interests. For example, Thomas Jefferson, who was a nemesis to Burr, was a musician as well as a political figure.

On the other hand, Lin-Manuel Miranda has demonstrated political activism, meeting with United States’ politicians to urge financial relief for Puerto Rico.

Burr may have had past lives focused on music and theatre. One must keep in mind that during the American Revolution, there were few careers available in music and theater. The founding of the American nation had a Puritan heritage, in which theater was considered the “work of the devil.” 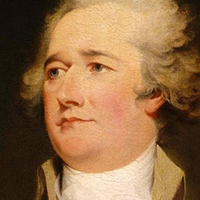 In portraying the life of Alexander Hamilton, whose image is provided to the right, in contemporary times as a hero of the American Revolution, Miranda has resurrected the persona he killed in a past lifetime, Hamilton.

There is another karmic connection involved in these cases, as President John Adams was one of Aaron Burr’s few public advocates. In addition, Adams was not a supporter of Hamilton, who wanted to start a war between the United States and France. Adams quashed Hamilton’s wish to become the Commander-In-Chief of this proposed war, as Adams perceived that financially and politically, the fledging American nation could not survive this proposed conflict.

Historians agree that John Adams’ analysis was correct, though his decision to avoid war with France led to his reelection defeat, as Hamilton, who was a member of the same political party, the Federalists, worked against  Adams in an effort to elect his own political ally.

Elon Musk, Who has been Identified as the Reincarnation of Thomas Edison, Also Neutralizes Karma with Nikola Tesla

As Lin-Manuel Miranda | Aaron Burr seems to have made amends with the soul of Alexander Hamilton, the same situation has happened regarding the reincarnation of Thomas Edison. Edison was in fierce competition with Nikola Tesla regarding how to delivery electricity to the emerging, American, industrial nation.

Edison was a wealthy man at the end of his life, while Tesla died poor in a room of the New Yorker hotel.

I believe that Thomas Edison | Elon Musk named his electric car company Tesla in a karmic nod to his past life adversary.

To review the reincarnation cases of Thomas Edison | Elon Musk and past life associates such as J.P Morgan, please go to:

The Reincarnation of Alexander Hamilton

By the way, in my book Return of the Revolutionaries, Alexander Hamilton is identified as reincarnating in contemporary times as the late US General Alexander Haig.

Physical Resemblance in Reincarnation Cases: The facial architecture of Aaron Burr and Lin-Manuel Miranda is consistent. The facial features of Alexander Hamilton and Alexander Haig are also similar.

Past Life and Karmic Relationships: Alexander Hamilton was killed by Aaron Burr, who reincarnated as Lin-Manuel Miranda, who has equalized that karma by resurrecting Hamilton’s image in contemporary times.

In addition, there seem to be a past life and karmic relationships between President John Adams, Aaron Burr | Lin-Manuel Miranda and Alexander Hamilton.