From: Old Souls, by Tom Shroder

Article by: Walter Semkiw, MD from  & Born Again and Return of the Revolutionaries

Hanan was born in Lebanon, in the mid-1930s. When she was twenty, she married Farouk Monsour, a member of a well to do Lebanese family. The couple had two daughters, named Leila and Galareh. Hanan had a brother named Nabih, who became prominent in Lebanese society, but died as a young man in a plane crash.

After having her second daughter, Hanan developed a heart problem and her doctors advised her not to have any more children. Not heeding the warning, she had a third child, a son, in 1962. In 1963, shortly after the death of her brother Nabih, Hanan’s health started to deteriorate. She then started to talk about dying. Farouk, Hanan’s husband, said that Hanan told him that “she was going to be reincarnated and have lots to say about her previous life.”(1) This was two years before her death.

Before her Death, Hanan Tries to Telephone Leila

At age of thirty-six, Hanan traveled to Richmond, Virginia, to have heart surgery. She tried to telephone her daughter Leila before the operation, but couldn’t get through. Hanan died of complications the day after surgery.

Spiritual Communication: An Announcing Dream from the Spirit Realm 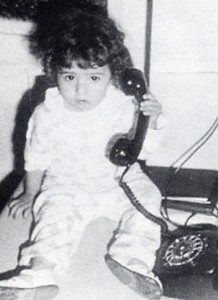 Ten days after Hanan died, Suzanne Ghanem was born. Suzanne’s mother told Ian Stevenson that shortly before Suzanne’s birth, “I dreamed I was going to have a baby girl. I met a woman and I kissed and hugged her. She said, ‘I am going to come to you.’ The woman was about forty. Later, when I saw Hanan’s picture, I thought it looked like the woman in my dream.”(2)

In other words, Suzanne Ghanem’s mother had a dream that she would have a child that had the appearance of Hanan Monsour, and this dream became a reality.

At 16 months of age, Suzanne pulled the phone off the hook as if she was trying to talk into it and said, over and over, “Hello, Leila?” The family didn’t know who Leila was. When she got older, Suzanne explained that Leila was one of her children and that she was not Suzanne, but Hanan. The family asked, “Hanan what?” Suzanne replied, “My head is still small. Wait until it is bigger, and I might tell you.”(3)

In trying to locate Suzanne’s past life family, acquaintances of the Ghanems made inquiries in the town where the Monsours lived. When they heard about the case, the Monsours visited Suzanne. The Monsours were initially skeptical about the girl’s claims. They became believers when Suzanne identified all of Hanan’s relatives, picking them out and naming them accurately. Suzanne also knew that Hanan had given her jewels to her brother Hercule in Virginia, prior to her heart surgery, and that Hanan instructed her brother to divide the jewelry among her daughters. No one outside of the Monsour family knew about the jewels.

Before she could read or write, Suzanne scribbled a phone number on a piece of paper. Later, when the family went to the Monsour’s home, they found that the phone number matched the Monsour’s number, except that the last two digits were transposed. As a child, Suzanne could recite the oration spoken at the funeral of Hanan’s brother, Nabih. Suzanne’s family taped the recitation, though the tape was eventually lost.

Farouk, a career policeman, has accepted Suzanne as the reincarnation of his deceased wife, Hanan. To support this conclusion, Farouk points out that from photographs, Suzanne accurately picked out scores of people they had been acquainted with, and knew other information that only Hanan would have known.

In this image comparison, Hanan Monsour is on the left side and Suzanne Ghanem is on the right. A striking physical resemblance is noted, which supports the premise that facial features can remain consistent from one incarnation to another. The image can be enlarged by clicking on it. Use the arrow keys to scroll up and down on the image.

Another Ian Stevenson, MD, reincarnation case which dramatically demonstrates how facial features can remain consistent from one lifetime to another is the case of: Rashid Kaddege | Daniel Jurdi

Physical Resemblance from One Lifetime to Another: Suzanne Ghamen has the same facial features as Hanan Monsour, her past life personality.

It is significant to note that Ian Stevenson first studied Suzanne in Lebanon when she was only a small child in the late 1960s. He revisited Suzanne in 1998 when he traveled to Lebanon with Tom Schroder, a journalist with the Washington Post who was writing a book on Stevenson. In 1998, Suzanne was now 35 years old and it was only at this point in time that Stevenson realized that Suzanne has the same facial features as Hanan Monsour. This occurred approximately 30 years after Stevenson first studied Suzanne in the 1960s. The point is that we are continuing to accumulate new evidence involving cases that have been evolving over decades.

An American case in which photos are available over two lifetimes that dramatically shows physical resemblance is:

Spirit Being Involvement: Hanan announced her upcoming birth to her future mother in a dream. In addition, Hanan’s soul appears to have known that Hanan would die prematurely and be reborn with memories of her past lifetime, as Hanan predicted this turn of events to her husband, Farouk. In his series of 1200 validated children’s past life memory cases, announcing dreams were observed in 22 percent of these cases.

Relationships Renewed through Reincarnation: As Suzanne, Hanan was reunited with the Monsours, her past life family, and demonstrated love and affection for Farouk, her past life husband.

Split Incarnation: Suzanne was born only 10 days after Hanan died. If it is assumed that the soul is involved in the development of the fetus, then the soul of Hanan was animating Suzanne’s fetus while Hanan was still alive. This overlap of lifetimes occurred for almost the entire duration of Suzanne’s gestation.

Note to Readers: Ian Stevenson, MD was a Professor of Psychiatry at the University of Virginia, who wrote in a very academic style, as his target audience was fellow scientists. On the Reincarnation Research web site, his past life cases are presented as children’s past life memory stories to make his academic work easier to understand. For those interested in appreciating the scientific rigor of his research, such as his use of multiple witnesses to establish corroborated testimony, please refer to the original reports written by Dr. Ian Stevenson.