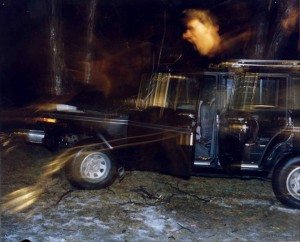 After a Fatal Automobile Accident, a Policeman Takes Ghost Photos

An Apparent Spirit Being or Ghost is Photographed

One winter evening, four teenagers went for a car ride through the Minnesota woods. At one point, a boy in the back of the car moved to the front passenger seat and the boy who was in the front re-positioned himself in a back seat.

Before the boy who moved to the front could buckle his seat belt, the vehicle veered off the road and struck a tree. The boy in the passenger seat was killed, while the other three teenagers were unharmed.

A Minnesota State Trooper came upon the scene, examined the boy in the passenger seat and realized that he was dead. The trooper radioed headquarters and requested assistance. As he was waiting for backup to arrive, the trooper started taking photographs to document the accident. He turned in the camera to the police lab. 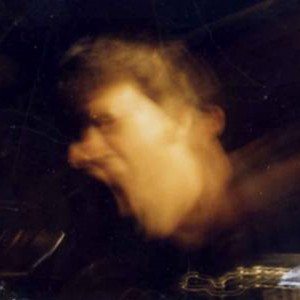 The state trooper also was unsure what to do with these supernatural images. On the advice of friends, the trooper contacted Echo Bodine, who he was told was a reputable clairvoyant in the Minneapolis area.

The trooper made arrangements to see Echo and when they met, he showed her the ghost images. He gave the photographs to Echo, telling her to preserve them and to do what she thought would be best.

Echo has kept these images in confidence for years. We are grateful to her for allowing these images to be posted on the ReincarnationResearch.com.

If the photograph with the apparent spirit of the deceased boy rising above the vehicle is genuine and not some type of artifact, then this spirit image has important implications. One would think that the police lab would have ruled out malfunction of the camera, including double exposures, before giving  the images to the state trooper.

Echo felt that the boy in spirit form is shouting “No!”–as the boy was not ready to die.

The image below and to the right depicts the dead boy sitting in the front passenger seat, slumped against the car door. In this posture, he could not have maintained the active pose of shouting, which is captured in the photo of the spirit being rising above the car. 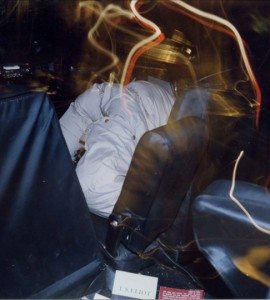 This fact supports that these are genuine photos of a person’s spirit body.

It is unclear what the colored lines of the light around the dead boy’s body represent. It may be that these lines of light are parts of the boy’s spirit body leaving the physical body, prior to coalescing outside of the physical body.

Ghost Photos Support that an Energy Template of the Soul Exists

The image of the boy’s face floating above the vehicle supports the premise that there is a spirit body that underlies the physical body.