How Cases Derived: Past Life Memories in Childhood

From: Reincarnation and Biology: A Contribution to the Etiology of Birthmarks and Birth Defects, by Ian Stevenson, MD

Past Life Stories of Sisters Phyu and Saipai & the Twins San and Nyunt: Sisters Reincarnate as Twins 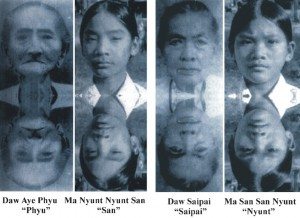 This set of cases involves two Burmese sisters who reincarnated as twin sisters, in which images demonstrate physical resemblances from one lifetime to another. As their names can be confusing for those who are not Burmese, I will abbreviate them for use in this narrative, utilizing the last word in their sequence of their names. As such, the names that will be used are defined below:

Daw Aye Phyu, the dominant past life sister, will be referred to as Phyu.

Daw Sapai, the younger and married past life sister, will be referred to as Sapai.

Ma Nyunt Nyunt San, the dominant twin, who has been identified as the reincarnation of Daw Aye Phyu, will be referred to as San.

Ma San San Nyunt, who has been identified as the reincarnation of Sapai, will be referred to as Nyunt.

The Lives and of Daw Aye Phyu and Daw Sapai

Daw Aye Phyu was the older sister and was born in 1869 or 1870, in the Burmese village of Seikcho, which had a population of about 500 people. She expected respect from those younger than her and would not allow anyone to talk back to her, which made her appear as a dominant individual. Phyu never married. She died in 1962 at the age of 92.

Her sister, Daw Sapai was born around 1881. She eventually married and lived in the same compound in Seikcho as Phyu, though in a different house. Sapai had a son named U Htun Su who liked to drink and gamble, which his mother did not approve of. Sapai had a grand-daughter named Ma Nge, who she called by the pet name of “Min Nge.” Sapai died in 1961 at the age of 80.

Both sisters were pious Buddhists and were engaged in compassionate acts, such as building shelters for pilgrims and founding a small monastery. They were very close to one another.

They had a distant male relative, U Bo Kay, a policeman, who regarded the elderly sisters as his aunts. During their final illnesses U Bo Kay cared for them, brought physicians to tend to them and bought medicines for them.

Sisters are Reincarnated as Twins

About two years after Phyu and Sapai died twin sisters were born in 1964 to U Bo Kay and his wife, Dwa Thein Yin, who we will refer to Yin. They were named Ma Nyunt Nyunt San and Ma San San Nyunt. Nyunt was born 20 minutes before San. The twins were born in the city of Yanaung, which had a population of 5000 and was about 4 km from Seikcho. Ian Stevenson believed that the twins were fraternal or dizygotic, as they had different facial features, though testing was not performed to confirm this.

Nyunt says She is from the Kokka Tree

When the twins were about two years old, their mother, Yin, ask them in jest,

“How is it that you both came to trouble me?” (11) Nyunt responded that she came from the kokka tree, which in translation means the acacia tree. This puzzled Yin, as there were no kokka trees in their area.

When the twins were three or four years old, someone mentioned the name of the U Htun Su, Sapai’s son. Nyunt then said testily that he should not be allowed to come to Yanaung because he “is a gambler” and “spend up all my property.” (12) Yin, realizing that Nyunt seem to be remembering the lifetime of Daw Sapai, asked her husband whether there are kokka trees in Seikcho. He confirmed that there were.

The Twins Remember their Past Life Names

In 1978, at the age of 5, the twins gave the names of the two sisters, Daw Aye Phyu and Daw Sapai, whose lives they seemed to be remembering. Yin, their mother, then showed the twins a photograph of the sisters. San said that Phyu was her and Nyunt said that the photograph of Saipai was of her. Yin said that subsequently the twins often talked about their previous lives to each other and they seem to be very attached to one another.

Past Life Behavior: Phyu | San have the Same Traits Relative to Sapai | Nyunt

The Twins visit their Past Life Homes

The twins were eventually taken to Seikcho with their parents and each twin went to their respective past life home. San saw that her past life home was being remodeled and complained, “My house is being demolished” (13) Inside the houses, when they saw photographs of Phyu and Sapai, they said they wanted to keep them.

Nyunt meets her Prodigal Past Life Son and Past Life Granddaughter

During their visit to their past life homes, Sapai’s son, U Htun Su, witnessed the proceedings, including Nyunt identifying herself as Saipai, his deceased mother. Nyunt then said to U Htun Su, “I don’t want to see you.” (14) In November 1980, Ian Stevenson asked Nyunt, when she was six years old, how she felt about U Htun Su. She replied, “I regard him as my son.” She then added that he gambled money. Stevenson asked if she had forgiven him. She replied, “I have gotten over my dislike of him.” In contrast, U Htun Su felt that both twins were unfriendly to him. (15)

In Seikcho, Nyunt made a significant recognition when she saw her past life granddaughter Min Ng approaching. Nyunt then made the statement:

“Min Nge is coming.” (16) Subsequently, the twins showed a strong interest in repeatedly being taken to Seikcho and later in childhood, they often went there on their own. When scolded, they even threaten to leave home and “return” to Seikcho. Nyunt would even pack her possessions to take with her to Seikcho, but the twins were prevented from moving.

Physical Resemblance: There is a marked resemblance between and Daw Aye Phyu and her reincarnation, Ma Nyunt Nyunt San, as well as between Daw Sapai and her reincarnation, Ma San San Nyunt. Though there was thought to be a distant familial relationship between the sisters and the twins, which could account for physical resemblance, it is significant that the twins matched their past life personas specifically in both physical appearance and personality.

Relationships Renewed through Reincarnation: The elderly sisters, who were very close, reincarnated as twin sisters. Ian Stevenson noted that it appeared that the reason for their reincarnation as twins was affection. As noted before, Ian Stevenson’s research involving 31 sets of twins showed that in all cases, the twins had significant past life relationships. The most common type of past life relationship was of siblings, which was observed in this set of cases.

Planning of Lifetimes: The sisters not only reincarnated as twins, they were born to the wife of U Bo Kay, who considered the elderly sisters as his aunts and took good care of them during their final illnesses. As such, it appears that from the spirit world, the sisters chose to incarnate into the family of an individual who loved them,