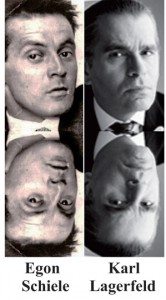 The Chanel company produced a short film entitled Reincarnation, provided below, in which past life personalities have the same facial features as their contemporary counterparts.

Similarity in facial features is indeed supported by independently researched reincarnation cases, including those published by Ian Stevenson, MD at the University of Virginia.

In sessions with Kevin Ryerson, I asked about the past lives of those featured in the Chanel Reincarnation film. Kevin channels a spirit guide named Ahtun Re who has demonstrated the ability to make past life matches with a high degree of accuracy.

When I asked about the director of the film, Karl Lagerfeld, who was also the Creative Director of Chanel, Ahtun Re  told me that in a past lifetime Lagerfeld was a student of the German painter Gustav Klimt.

Through research, I found that Egon Schiele was a protegé of Klimt who achieved greatness as a painter. In a subsequent session, Ahtun Re affirmed that Karl Lagerfeld was the reincarnation of Egon Schiele.

Physical Resemblance in Reincarnation Cases: There is a similarity in the facial architecture of Egon Schiele and Karl Lagerfeld. Physical appearance seems to be determined by the interplay of the soul’s template and hereditary factors.

Past Life Talent: Egon Schiele was a leading painter of his day and Karl Lagerfeld was an accomplished artist, photographer and fashion designer.

Change of Nationality: Egon Schiele was Austrian, while Karl Lagerfeld was of German descent.