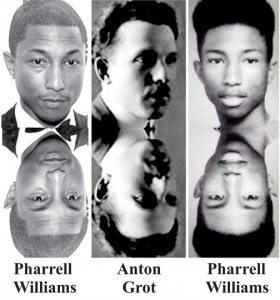 The Chanel company produced a short film entitled Reincarnation in which past life personalities have the same facial features as their contemporary counterparts. Similarity in facial features is indeed supported by independently researched reincarnation cases, including those published by Ian Stevenson, MD at the University of Virginia.

I have worked with trance medium Kevin Ryerson since 2001. Kevin channels a spirit guide named Ahtun Re who has demonstrated the ability to make past life matches with a high degree of accuracy.

In sessions with Kevin, I asked about past lives of those featured in the Chanel film. When I asked about the multi-talented Pharrell Williams, Ahtun Re told me Pharrell, in a past lifetime, was the art director of Busby Berkeley’s musical extravaganzas, such as the Gold Diggers of 1933.

I myself had never heard of Busby Berkeley, but with a little investigation, I found that the art director for his Gold Diggers movie was Anton Grot, who became very successful in Hollywood. In a subsequent session Kevin, Ahtun Re affirmed that Pharrell was Anton Grot in a past lifetime.

Of interest, Pharrell Williams grew up in Virginia Beach, Virginia, which is the home of Edgar Cayce’s Association for Research and Enlightenment. Cayce is one of America’s most famous trance channels, whose teachings did include reincarnation. As such, it is likely that Pharrell has been exposed to the doctrine of reincarnation. Pharrell has stated that he believes in God and that he is an Universalist. Evidence of reincarnation does promote an universalist point of view.

Physical Resemblance in Reincarnation Cases: There is a resemblance between Anton Grot and Pharrell Williams.

Past Life Talent: Anton Grot was an art director for some of Hollywood’s most famous musicals, while Pharrell Williams is a successful musicianl and designer.

Change in Race and Nationality: Anton Grot was born in Poland and was Caucasian, while Pharrell Williams was born in the United States and is African-American.