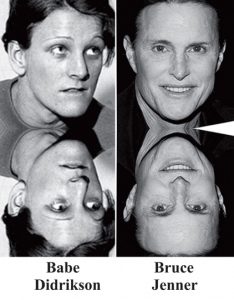 Bruce/Caitlyn Jenner reveals He is Transgender

In April 2015, Bruce Jenner publicly acknowledged that he is transitioning from being a man to being a woman. In the approximately 1200 validated reincarnation cases studied by Ian Stevenson, MD of the University of Virginia, Dr. Stevenson found that souls change gender in only 10 percent of cases.  In cases derived through my work with Kevin Ryerson, there is also the same proportion of cases with gender change, approximately 10 percent. These observations suggest that one’s soul has a preferred gender to incarnate in.

These observations made me wonder about Bruce Jenner’s past incarnations.  In a session with Kevin Ryerson, the spirit guide Ahtun Re revealed that Bruce’s most recent past life was as a female athlete who was one of the first women to compete in the Olympics. Further, Ahtun Re said this woman won events that are part of today’s Olympic decathlon.  With some research, I found a possible candidate in Babe Didrikson Zaharias, who lived from 1911 to 1956. In a subsequent session with Kevin, Ahtun Re affirmed that Bruce Jenner is the reincarnation of Babe Didrikson Zaharias.

The decathlon is made up of 10 track and field events: 100, 400 and 1500 meter runs, the 110 meter hurdles, the long and high jumps, pole vault, shot put, discus throw and javelin throw. Traditionally, winners of the Olympic decathlon, such as Bruce Jenner, are given the title of “Worlds Greatest Athlete.”

Babe Didrikson Zaharias competed in the 1932 Olympics held in Los Angeles. In that year women were allowed to compete in only a limited number of events and a women’s decathlon did not exist. At the 1932 Olympics, Babe won medals in the 80 meter hurdles, the high jump and the javelin throw, reflecting skills needed to win a decathlon, namely, running, jumping and throwing.

Babe was also a championship golfer, which reflects Bruce Jenner’s love for the game of golf. She also excelled at other sports. Babe was known as a fierce competitor who gave it her all, much like Bruce Jenner. For her achievements the Associated Press named her the “Ninth Greatest Athlete in the Twentieth Century.”

Ahtun Re also revealed that in most of Bruce Jenner’s incarnations, Jenner was a woman. In these female past lives, Jenner demonstrated the same tendency to be a very competitive athlete, though this trait could be expressed in various ways, such as being a female warrior. Jenner’s soul’s preference for female incarnations explains why Jenner has stated that he has soul of a woman and why he is transgender.

In response to inquires I made regarding gender identity issues, Ahtun Re stated that there is variability in the reasons for these states of being. The simplest category to understand is transgender individuals, as these people almost always result from a soul who incarnates into a gender they are not used to, such as in the case of Babe Didrikson Zaharias | Bruce Jenner.

In contrast, the reasons for why an individual is gay or lesbian can vary. Ahtun Re stated that a small proportion of gay and lesbian individuals are so because they incarnated into a gender they are not used to. The Ian Stevenson case of the Japanese Soldier | Ma Tin Aung Myo is such an example, in which a male soldier reincarnated as a female but retained a male mindset. Though a woman, Ma Tin Aung Myo retained a physical attraction to women and she became a lesbian. To review this case, go to:

Ahtun Re said that in contrast, for the vast majority of people who are gay or lesbian, this is simply the nature of their souls. These people tend to reincarnate across incarnations with the same predispositions, that of being male or female homosexuals.

An individual may also be homosexual for karmic reasons. For example, if an individual is very conservative and condemns or persecutes homosexuals, that person may need to experience a homosexual lifetime as a learning experience.

The important thing is not to judge others for their sexual preferences or gender identities if these qualities are not the same as ours. We all can experience lifetimes in which we are gay, lesbian, transsexual or other variant of gender identity.

Physical Resemblance in Reincarnation Cases: In photos of a young Bruce Jenner, physical resemblance with Babe Didrikson Zaharias is not as apparent as in photos of Jenner as he transitions into being a woman. As Bruce becomes more female, the more he looks like Babe.

Past Life Talent: Babe’s competitive spirit in athletics and her sports achievements are reflected in the life of Bruce Jenner.

Split Incarnation: Babe Didrikson Zaharias died in 1956, while Bruce Jenner was born in 1949. As such, their lives have overlapped by about 7 years. Accordingly, this represents a case of split incarnation, where a soul can animate two incarnations at the same time.