Another Egg, Another Life: A Tool to Stimulate Past Life Memories in Children, by Gordon Keirle-Smith 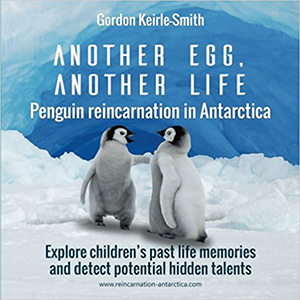 Gordon Keirle-Smith has written a wonderful, entertaining book for children, entitled Another Egg, Another Life, designed to stimulate past life memories. The method used is subtle and non-directive, allowing imagination to serve as a catalyst to allow past life memories to emerge.

The book involves a penguin who, over time, understands the past lives he has had and discovers of how reincarnation works, including that souls reincarnate in groups.  Ian Stevenson, MD of the University of Virginia compiled 1200 cases in which children’s past life memories were objectively validated. In aggregate, these cases provide proof of reincarnation. Stevenson cases do show that souls plan lifetimes to be reunited with loved ones. To learn more about Dr. Stevenson’s work and cases that show how relationships are renewed through reincarnation, please go to the following links:

Evidence of reincarnation can create a more peaceful world, as reincarnation research, including the work of Ian Stevenson, MD, shows that souls can change religion, nationality and ethnic affiliation from one lifetime to another. Most conflicts and wars are based on differences in these cultural markers of identity. In Gordon Keirle-Smith’s book, this phenomenon is illustrated by the protagonist incarnating as different types of penguins.  To learn more about such reincarnation cases, go to:

Reincarnation Cases with Change in Religion, Nationality and Ethnic Affiliation

In sum, Another Egg, Another Life, is highly recommended. By gently stimulating past life memories in children,  parents can help create a more peaceful and evolved world.