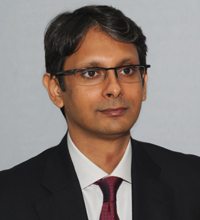 Ananjan studied English literature at St. Xavier’s College of Calcutta. He then earned a Bachelor’s of Law degree (LLB) at the University of London, School of Oriental and African Studies. After working as a counsel in the Calcutta High Court for five years, he returned to London where he co-founded ALMT Legal, a firm specializing in India law practice. From an initial group of four attorneys, ALMT has grown to include over 100 attorneys with 16 partners. ALMT has offices in London, Bangalore, Mumbai and Delhi. Ananjan’s practice is focused on international commerce, particularly relating to the marine and aviation industries.

In addition to his interest in law, Ananjan has been spiritually inclined since childhood. He was initiated in the school of Sri Ramakrishna Paramhansa at age 13. He has also worked as a pranic healer and has practiced Arhatic yoga, having received the teachings of Master Choa Kok Sui. Ananjan has an inner urge to play a role in the evolution of humanity, helping to co-create and bring into being ideas, institutions, facilities and faculties that human civilization needs most at this juncture of its evolution.

Ananjan comes from a very eminent political and judicial family. His great-grandfather, Sir Provash Mitter, was a member of Viceroy’s Executive Council and a Minister in the Government of Bengal in the 1920s and early 30s. He played a role in developing early policies of the future Indian State (still under British Rule) regarding federal structure, taxation and Hindu-Muslim relations. These policies were formalized into the Government of India Act 1935 and the Constitution of India, adopted in 1950.

Ananjan’s great great-grandfather, Sir Romesh Chunder Mitter, at 33 years of age, was the youngest and one of the first judges of the Calcutta High Court (1874 -1890) and he officiated as chief justice. After retirement, he worked with the newly formed Indian National Congress.

Ananjan’s great uncle, Sir Binod Mitter, was a Member of the Judicial Committee of the Privy Council of England and died in office in 1931, at the age of 59.

Please note that Ananjan comes from a region of India that has close historical ties to Bengal, which is why he is fluent in Bengali. A very interesting Ian Stevenson xenoglossy case, The Reincarnation case of Sharada | Uttara Huddar, includes a review of the political history of this region.