Alfred Higgins, a House Painter, Falls Off a Ladder, Experiences the Afterlife and Takes his Spirit Guide to a Pub 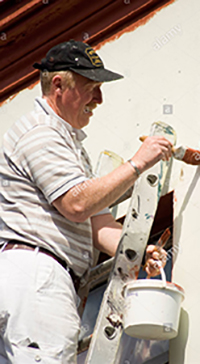 Source: Communication from the deceased in this case was facilitated through the direct voice mediumship of Leslie Flint. George Woods and Betty Green were present during tape recordings of Flint’s mediumship sessions and they asked questions of the deceased, who spoke in their own natural voices. Neville Randall reviewed these recordings and summarized the dialogues in his book, Life After Death. Dialogue in the article provided below has been slightly edited to make it more concise.

Alfred Higgins shares that He Died by Falling off a Ladder

In a Leslie Flint direct voice mediumship session on October 14, 1963, a spirit came through and told Betty Greene and George Woods that his name in life was Alfred Higgins and that he lived in Brighton, England. Betty asked Higgins how he passed over. Alfred responded:

“I fell off a letter. I wasn’t killed outright, but I was unconscious and I died in the hospital. Of course this was quite a few years ago. I was a painter and decorator.”

Ms. Green then asked: “Mr. Higgins, can you tell me your reactions on passing over? How you found yourself?”

“Well, when I first had any realization or consciousness of what happened to me, I was lying on a bank overlooking a river. I couldn’t make out where I was. I didn’t recognize the spot and couldn’t think how I got there.”

A Spirit Guide informs Alfred that He is Dead 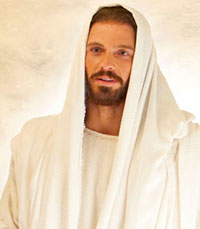 “Then I saw someone coming towards me dressed in what looked to me as if he was a monk. He had a sort of long habit or robe on and he looked to be a benevolent gentleman, and quite young. I thought he’s a young person to be a monk. As a matter of fact, quite frankly, I thought at the time that he looked like Jesus. But I realized of course it wasn’t afterwards.”

He came and stood beside me and said: “Ah, you’ve arrived.”

“Arrived?” I says,  “I don’t quite know what you mean. All I know is I don’t recognize this place. It’s very beautiful.”

‘Ah,” he says, “There are a lot of people seem to think that when they’re dead they’re nothing at all. You are in a condition of life which is as real, as you can see yourself, as anything you’ve know before. Life beyond what you call death is a state of mind. Your condition at the moment is perhaps a little bewildered. But you’re not unhappy, and certainly you seem, as far as I can tell, quite at ease. You seem quite calm and placid. You’re not over anxious about anything in particular, are you?”

“No,” I says, “But now I’m beginning to realize that what you say is so. I must admit that I’m a bit concerned about my people. It must be a terrible shock for them, you know. I’ve no recollection of dying. I don’t remember anything but falling. At least I had a feeling I was falling, and then I don’t remember no more.”

Alfred travels Back to Earth to Visit his Wife, Ada 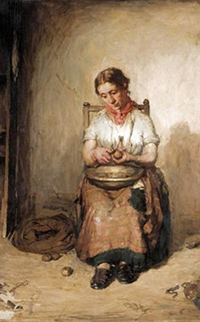 “Would you like to go back for just a little while to see your people?” he says. “Do you think that would help you?”

“Well,” it would be interesting, wouldn’t it. I would like to see them.

“Well,” he said, “they won’t realize that you’re there because they can’t see you and they won’t hear you if you speak to them.”

“Well, not much point in going then, is there?”

“I’ll go,” I says. “It’s possible that Ada-that’s my wife-she might-I’d like to see how she’s is getting on, anyway.”

‘Well how do we get there then?”

I climbed up this hillside and on to a road. As we walked along he says, “Just take my hand.”

I felt a bit peculiar, you know. I thought it sounds a bit silly me holding someone’s hand like this. But still he said to hold his hand so I held it.

It seemed so strange, but as soon as I touched his hand everything gradually seemed to disappear. It was as if I was going to sleep, in a kind of way, yet it wasn’t sleep. It was just a sort of lack of understanding and realization of things around and about me. I became sort of unconscious I suppose.

The next thing I knew I was standing in our kitchen, and I was watching my wife.  She was standing over the sink peeling some potatoes. I thought I wonder if she knows I’m here, and I called her name. She didn’t hear me.

My friend says: “She won’t hear you, you know.”

“Nothing you could do. But she may sense your presence. You can never know. Let’s just wait a little while.”

Spirits Communicate with the Living though Thought

“Concentrate your thought on her. Just think hard. Think as hard as you can.  Think her name.”

I did. And all of a sudden she stood up and looked. She dropped the knife and potato she was peeling, and she looked round. Properly bewildered she looked, almost scared.

I was rather sorry in a way that I’d scared her. She just flew out of that kitchen. She opened the door, and then sort of shut it again, and then she sat down, put her head on the table and started to cry.

I felt awful about this. I thought, “Oh dear, this is terrible.”

“Well, if I’m to make her miserable like this, there’s not much point, is there?”

“Don’t let that worry you,” he says, ‘This often happens. They don’t know anything with any certainty. They’ve never been told about life after death. But she’ll come, she senses, she feels, and deep down in herself, deep down inside, she knows.”

“Isn’t there nothing I can do?”

“Nothing,” he says. “This is not the time. You must wait. Later on perhaps we’ll be able to do something.”

“I don’t think you can do much good here. I think the best thing is for us to go back.”

Alfred asks his Guide to Take Him to his Old Pub, to Visit his Mates

“All right.” Then I says: “But I would like to go to one or two places before we go back, if I may.”

“Do you mind coming into a pub?” He laughed when I said that. “You don’t mind do you?” I says. “It seems a strange question for me to ask an angel to come to a pub.”

“Well I was under the impression that since you’ve here, highly respectable and all that, you must be. But I notice you haven’t got any wings.”

“Of course,” he says, “you don’t have wings. That’s the old idea that a lot of religious people get on Earth.”

He had a wonderful sense of humor, and I felt so settled with him. I says, “I would like to go to this pub.”

I thought to myself this is going to be a bit awkward because he obviously doesn’t know where the pub is and I don’t know how to get there on my own, not as I am now situated, without a physical body as you call it.

“I know what you are thinking,” he says. “You just think of the place, close your eyes, and we’ll be there.”

I thought, “This is alright.” He put out his hand out to me. I thought, “I suppose I put my hand in his again.” So I did. 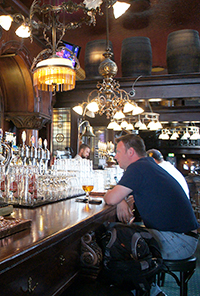 The next thing I know I was standing in the bar of this pub, and there were three of my old mates there. I went up and stood beside one, and I remembered what I’d been told to do about the wife-to concentrate and think hard. He’d got this mug of beer up to his mouth, and I was thinking to myself his name, and all of a sudden he dropped it onto the counter. He looked quite bewildered.

“Didn’t you hear nothing?”

They laughed and said: “What’s up with you mate? You got the jitters?”

But he heard me alright. It was done by my thoughts. One of the first thing I realized was that you don’t have to talk to be heard. You’ve got to concentrate hard. It is a matter of thinking all the time that you want to get into touch, or you want to do something, and then it’s possible. You just can’t do it by speaking out in the old way, you know. It was my first lesson in this sort of thing.