A Past Life for President George H. W. Bush as British Admiral Richard Howe: Though a Military Figure for Britain in the American Revolutionary War, Howe was an Advocate for Democracy 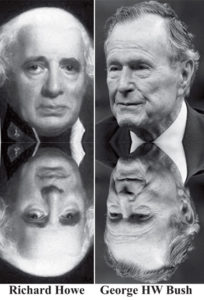 Though the facial resemblance is not the best in this reincarnation case, the overall bone structure is similar. Facial bone structure is what seems to stay the most consistent from one lifetime to another, though soft tissue features can be modified by genetic factors. Click on images to enlarge them.

Richard Howe placed his ships in the Boston Harbor, with the ships’ many cannons poised to destroy the city of Boston.

Though at the time Britain was the greatest military power in the world, George Washington, who was nominated to be the leader of the US Patriot Army by John Adams, drove the British naval fleet from the Boston Harbor by placing artillery captured at the Battle of Ticonderoga on the hills overlooking Boston. Howe understood that if the artillery cannons were fired, his fleet would be destroyed. 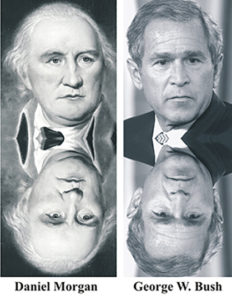 To avoid disaster for the British Navy, Howe ordered his ships to evacuate the Boston Harbor. It was the first military victory for the infant nation of the United States.

Note that George H. W. Bush was a US Naval aviator who was shot down during World War II. As such, he was an American war hero in contemporary times, but as Richard Howe he was a British military hero during the time of the American  Revolution.

In trying to understand this course of events, I asked about this situation to the spirit guide Ahtun Re, who I have been working with through the mediumship of Kevin Ryerson since 2001. Ahtun Re has demonstrated the ability to make accurate past life matches. I asked Ahtun Re how a British Admiral in the American Revolutionary War became a President of the United States, a nation that was Howe’s former foe.

Ahtun Re told me that though Admiral Howe was a devoted servant to his nation, Great Britain, he had great sympathy for the concept of a country governed by its citizens, rather than by a royalty installed by hereditary birth. Though Howe was loyal to his country, he was fascinated and supportive of the ideals of the new American nation. Indeed, history books have affirmed Richard Howe’s sympathy to the American ideals.

As a soul, Richard Howe planned to be reborn into the United States to become one of its advocates and leaders. 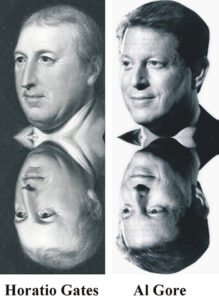 Horatio Gates in contemporary times has been identified as Al Gore, who was George W. Bush’s opponent in the US Presidential election of 2000. I did a radio interview by the psychic and physical medium Uri Geller in the year 2000 shortly before George W. Bush defeated Al Gore in a hotly contested election. I discussed the past lives of Al Gore and George W. Bush during the American Revolution in that interview.

Though I didn’t know it at the time, Uri is a friend of Al Gore. After the interview, Uri told me he would telephone Al Gore, who was in the White House at the time as Vice President to Bill Clinton, to advise him of this information.

These reincarnation cases show how adversaries in one war, such as Howe | Goerge W. H. Bush, Morgan | George W. Bush and Gates | Gore, can reincarnate to promote a shared ideal.

I had the pleasure of meeting George W. Bush’s Secretary of State, Condoleezza Rice, at an event in Washington, DC, in which I told her of the Daniel Morgan | George W. Bush reincarnation case. She surprised me by acknowledging that she knew of Daniel Morgan of the American Revolutionary War. I hope she told her boss of this past life connection.

The emotional friendship that evolved between George H. W. Bush and the person who defeated him in his bid for reelection, President Bill Clinton, has been much publicized. In my book, Return of the Revolutionaries, Clinton, in a past life, has been identified as a leader of the American Revolution named Peyton Randolph. 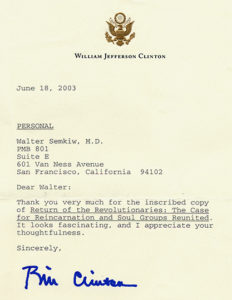 I sent a copy of my Revolutionaries book to President Clinton after it was published in 2003. I was very surprised and thankful when I received a card from him thanking me for the book, noting that my book looked “fascinating.” Click on the letter to enlarge it.

These reincarnation cases show how enemies in a prior war can become allies in a greater cause, in this case, the cause of freedom and democracy.

Other political reincarnation cases of contemporary times include those of:

Principles of Reincarnation: Evidence of Past Lives

Past Life Physical Resemblance: The facial features of Admiral Richard Howe and George H. W. Bush are roughly consistent, as are those in the other reincarnation cases cited.

Past Life Talents: Richard Howe was a military leader of the British Empire, just as George H. W. Bush was a US naval aviator and the Commander of Chief of the United States.

Change in Nationality: Richard Howe was a British military leader in the war between England and the fledgling United States. Howe reincarnated into the United States as a George H. W. Bush, a leader of democracy, a concept that was dear to Richard Howe.

If people understood that souls can change nationality, religion and ethnic affiliation from one lifetime to another, the world would become more peaceful place, as most wars are based on differences in these cultural markers of identity. A case in point is the:

Relationships Renewed through Reincarnation: It has been noted that George W. H. Bush, in his past lifetime as Admiral Howe, was a contemporary of Daniel Morgan, a US Patriot Colonel and then General in the American Revolutionary War. Morgan reincarnated as George W. Bush, the son of Admiral Howe | George H. W. Bush. As such, enemies in one lifetime can become family in another.

In addition, a military figure during George H. W. Bush’s service as US President became the future US commander of the war in Afghanistan under his son, President George W. Bush. This US General, Tommy Franks, has been identified as the reincarnation of George Washington.

Washington, recall, forced the navy of Admiral Richard Howe to evacuate the Boston Harbor by the cannons captured at Ticonderoga. Again, past life foes, in the personas of Richard Howe | George H. W. Bush and George Washington | Tommy Franks, have reincarnated to become allies.

The bottom line is that leaders of humanity must strive to secure ideals for a more peaceful and compassionate world, a vision that I am sure that the soul of Admiral Richard Howe | President George H. W. Bush would endorse. God bless their soul.