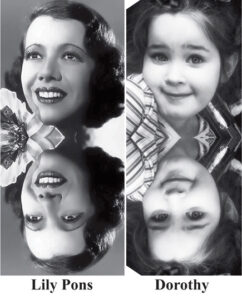 Past Life Talent: Dorothy, as a Child, is a Natural Actress and Singer

Dorothy Angelica was born on Sept 24, 2010 in the United States. Her mother, Kira, wrote to me in 2019 regarding her daughter’s past life memories.

Kira related that Dorothy was an entertainer before she learned to talk. Dorothy would jump up and down in her crib to make everyone around her laugh. When Dorothy was 3 and a half years old, she was in a musical production with 30 other children of varying ages. Dorothy stole the show. Other parents admitted to Kira that they ended up video recording Dorothy instead of their own kids, due to Dorothy’s magnetic stage presence.

Kira relates that Dorothy loves to wear bright bows, sometimes ten at a time or more. She is very loud, talkative, bubbly and excitable–wildly popular with everyone.

Dorothy’s music teacher shared with Kira that her daughter has perfect pitch, which means a person is able to re-create a musical tone without a reference tone.

Kira has a Psychic Experience or Vision before Dorothy was Born

When Kira was 8 months pregnant with Dorothy, she was up late at night in her dining room sewing a baby blanket for her child to come. Kira suddenly heard a young voice calling from their kitchen who exclaimed, “Mommy! Mommy!” Kira went to the kitchen, but no one was there. Kira returned to the dining room and her sewing.

Kira then once again heard a child saying, “Mommy,” this time coming from the family’s living room. Kira went to the living room and again, no one was there.

Kira went back to the dining room to continue sewing. She is a spiritual person and speculated that the soul of her future child was communicating to her. After working on the blanket for a few more minutes, Kira looked up at the door going to the kitchen and saw a girl, who appeared to be about 10 years of age.

This girl was wearing a homemade, plaid dress. This girl smiled at Kira and Kira smiled back. The vision of the girl then faded away. Kira felt very happy after this experience. She speculated that this girl was the child that would be born to her. The plaid dress she was wearing was perhaps a something her future daughter wore in a past incarnation.

After Dorothy was born and matured, Kira realized that the girl in her vision was in fact Dorothy.

Reincarnation research does provide evidence that souls who are about to incarnate into a family can send dreams to members of that family, usually the mother of the incarnating soul, to signal that they will be arriving. Ian Stevenson, MD of the University of Virginia called these “announcing dreams.” Kira seems to have had an “announcing vision.” To review these types of cases, please go to:

Dorothy Remembers Her Past Life Name

When Dorothy was 6 years old, Kira decided to share with her the vision she had of the girl in the plaid dress. Recall that this vision occurred before Dorothy was born.

Kira had taught Dorothy to meditate and upon hearing of her mother’s dream of the girl in the plaid dress, Dorothy decided to meditate to see if she could find out who that girl was in a past life. Dorothy, who again was just 6 years old, had just started kindergarten and had not yet learned to read, nor did she know how to use a computer. As such, she did not have the ability to research possible past life identities though normal means, such as through the Internet. 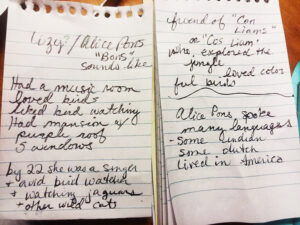 After a few minutes, Dorothy started rattling off details of a possible life. Kira grabbed a notebook and scribbled down what Dorothy said. Kira documented Dorothy’s statements over time. She thought that her daughter was describing imaginary things, but Kira wrote it all down anyhow.

While Dorothy was sitting on the floor meditating, she suddenly opened her eyes and said:

“Mom, I know who I used to be in a past life. Her name was something like Lizy or Lily, but her REAL name was Alice Pons.”

Though skeptical, Kira Googled these names and found that Lily Pons was an opera singer born in 1898, in France, who enjoyed fame in the 1940’s. When Kira read that Lily’s birth name was Alice, Kira gasped and almost fainted. Kira, though, did not reveal what she found on the Internet to Dorothy, as she wanted to see what else her daughter may say spontaneously.

Kira asked Dorothy about anything else she remembered about this past lifetime.

Dorothy said that her husband’s name was “Cos Liams.” She said that they had pets and described other details of this past lifetime. Over time, Dorothy added that Lily Pons spoke many languages, played piano, loved to sing and was a professional singer by the age of 22. Dorothy said Lily had a music room in her house, loved wild cats and the singing of birds.

Kira noted that at this point in her daughter’s life, Dorothy had developed frequent, very painful stomach aches. Dorothy herself stated to her mother:

“Ever since you started talking about dying and being reborn, I started having a terrible stomach ache, and I feel sad. I might throw up, Mom. It feels like I had a bad stomach in my past life. Very bad. It makes me sad.”

One night, when she was having one of these fits, Dorothy declared, “Now I know what Lily Pons died from, Mom. She died from a bad stomach ache!” That was Dorothy’s last stomach ache.

Kira researched and found that Lily Pons had died from pancreatic cancer, which does cause abdominal pain. Upon reading this, Kira’s hair stood on end!

Dorothy Recognizes her Past Life Photo

Kira finally shared with Dorothy what she had learned about Lilly Pons on the Internet and showed her a photo of Pons, which prompted Dorothy to exclaim: “Hey! That was me! Now you’ve seen me with short hair, mom!”

The Life of Alice “Lily” Pons

Alice Joséphine Pons was born in France on April 12, 1898.  She first studied piano at the Paris Conservatory, winning the First Prize at the age of 15. She went on to become an operatic singer and actress who went by the professional name of Lily Pons. She moved to New York City and performed with the Metropolitan Opera from 1931 to 1960, had television appearances such as on the Ed Sullivan Show and she made dozens of musical recordings. A town in Maryland, Lilypons, was named after her.

Lily was married twice. Her second husband was conductor Andre Kostelanetz, which corresponds to Dorothy’s memory of being married to a man whose name was “Cos Liams.”

Physical Resemblance in Reincarnation Cases: The facial features of Alice Pons and Dorothy Angelica are similar.

Past Life Talent, Behavior and Abilities: The singing and acting talent of Alice Pons is being replicated in the persona of Dorothy Angelica.

Change of Nationality: Alice Pons was born in England, while Dorothy Angelica was born in the United States. Understanding that nationality and ethnic affiliation can change from one lifetime to another can help a more peaceful world, as most conflicts and wars are based on differences in these cultural markers of identity.

Spirit Beings in Reincarnation Cases: Kira Angelica had a vision of her daughter to be born. When Dorothy matured in age, Kira realized that the girl in her vision in the plaid dress did resemble Dorothy.

Ian Stevenson, MD of the University of Virginia called dreams that foretold an incarnation as “announcing dreams.”