Wayne Peterson as the Reincarnation of Nicolas Roerich 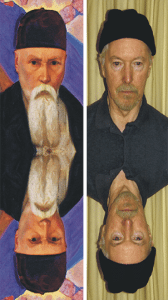 Affirmed by Ahtun Re in an Ryerson-Semkiw Reincarnation Research Session

Over time, I learned of his fascination with Nicolas Roerich and I observed that the painting that he did for the original cover of his book, Extraordinary Times, Extraordinary Beings, very much resembled a Roerich painting of the Himalayan mountains.  This art from this original book cover is provided below and to the right. Click on images to enlarge them.

It occurred to me that Wayne may be the reincarnation of Roerich. Once when I was visiting him in Las Vegas I shared my hypothesis with him. In humility, he thought this was not possible, though I could tell he was intrigued about the possibility. In a session with Kevin Ryerson, the spirit being Ahtun Re confirmed that Wayne is the reincarnation of Nicholas Roerich.

Once Ahtun Re had made this confirmation, I researched Roerich and found amazing similarities between the two.

In childhood, Nicolas and Wayne both wanted to work with a Christ figure (Roerich-Rigden Jyepo, Wayne-Jesus)

Nicolas and Wayne both could draw and paint without lessons.  This talent appears to have come from Wayne’s lifetime as Claude Ledoux. Featured to the right is a comparison of Roerich’s art (left) and the art of Wayne Peterson (right).

Both write extensively about the spirit being Maitreya, another Christ figure, though Wayne in his lifetime had direct experiences with Maitreya, which he describes in his book, Extraordinary Times, Extraordinary Beings.

Both write extensively about Shambala, though Wayne related that he was was taken to Shambala by Maitreya. Shambala,  per Wayne, is a spiritual oasis which is anchored over the Gobi desert.

Both write about UFO experiences

Both write that in a time of crisis and famine, the ruler of Shambala, Maitreya, will appear and nourish humanity with spiritual food.

Both were talented administrators.  Nicolas, at age of 26, won job as Director of Society for the Encouragement of the Arts and later directed an art school. Wayne was the Director of the Fulbright Scholarship Program, which is part of the State Department of the US.

Both were active in diplomacy.   Nicolas worked with diplomats to create the Roerich Pact in 1935, to protect art work, churches and culture during World War I. FDR was President of the US at the time and supported Roerich’s efforts. For his work, Roerich was nominated for the Nobel Prize.  Wayne was a career diplomat and has met 4 US presidents and he gave a presentation on Maitreya to then Cardinal Ratzinger which lasted 3 hours. Wayne’s diplomatic skills appear to be related to an even earlier lifetime, that of Francesco Foscari.

Both had similar, easy going, personalities.

Past Life Talent: Both Roerich and Wayne were able to draw and paint naturally, without lessons. This talent seems to stem from a prior lifetime as Claude Ledoux.