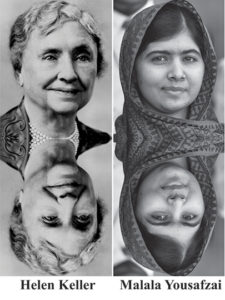 When Malala Yousafzai was shot in the head by the Taliban on October 9, 2012 in retaliation for her efforts to promote education for girls and women in Pakistan, her heroism made the heart of the world embrace her and after her recovery, she became a world-wide celebrity.

I was curious about the soul of this girl who had the courage to defy the Taliban and in a session with trance medium Kevin Ryerson, I asked who Malala was in a past lifetime. Kevin channels a spirit guide named Ahtun Re who has demonstrated the ability to make past life matches with a high degree of accuracy.

I was surprised when Ahtun Re told me that in a past life, Malala was Helen Keller, who became blind and deaf after an illness, most likely meningitis, in infancy. Despite having these disabilities, Keller became the first deaf and blind person to earn a bachelor’s degree and went on to become an author and activist, promoting a woman’s right to vote, labor rights and anti-militarism. In sum, Malala is following in the footsteps of Helen Keller in being a champion for women and for greater world peace.

There are some advocates of reincarnation who assume that any misfortune a person suffers is the result of bad karma from a previous incarnation. I asked Ahtun Re why the soul of Keller | Yousafzai was born in such difficult circumstances in two lifetimes.

Ahtun Re explained that the soul of Keller | Yousafzai did so voluntarily, as this is a soul who is deeply committed to elevating the well-being of those who live challenging lives. Helen Keller led the revolution to humanize those born with devastating handicaps and to show how these individuals can lead productive and fulfilling lives. Malala has led the movement to give rights to women in Muslim countries where education and personal freedom for women have been severely restricted by cultural norms.

Ahtun Re specifically stated that Helen Keller being deaf and blind, as well as the assassination attempt on Malala, were not karmic in origin. Rather, these were circumstances that the soul of Keller | Yousafzai had chosen to make a positive impact on society.

To clarify further, the assassination attempt on Malala was not predestined. Rather, the soul of Keller | Yousafzai placed herself into a Muslim country where women’s rights were being unfairly limited to change that societal situation. Though the assassination attempt was not predetermined, Malala’s soul knew that there was risk in trying to change the status of women in the Islamic world.

Physical Resemblance in Reincarnation Cases: The facial architecture of Helen Keller and Malala Yousafzai are similar. Click on the image to enlarge it.

Past Life Talent and Behavior: Helen Keller and Malala Yousafzai have both demonstrated courage in incarnating into difficult circumstances and have showed fortitude and intelligence in their missions to help enlighten the world.

Change of Religion and Nationality: Helen Keller was born in the United States and was a follower of the Swedish mystic Emanuel Swedenborg, who was Christian in orientation. In contrast, Malala was born into a Muslim family in Pakistan. If people knew that one can change religion and nationality from one lifetime to another, conflicts and wars based on these cultural markers of identity would be mitigated.